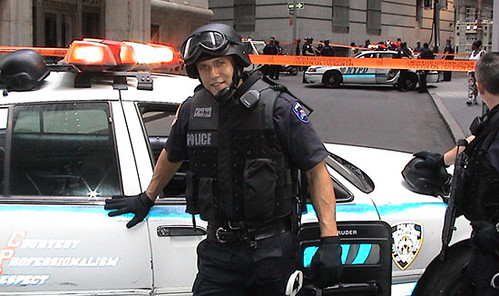 Not every man gets to watch his wife run through horn-honking traffic in Times Square while wearing a princess’s gown. But for Aaron Vexler, such scenes are common.

His wife wasn’t fleeing the altar. Temple alumni Aaron and Caroline Vexler both work in the stunt industry in New York City. During the filming of Disney’s Enchanted, Aaron doubled Patrick Dempsey, while Caroline mirrored Amy Adams. As for other 2007 films, they’ve both stunted in American Gangster, Across the Universe and I Am Legend. Collectively, they have performed upwards of 60 roles.

When Aaron Vexler and Caroline Leppanen attended Temple in the late 90s, they may have exchanged casual hellos in passing – or failed to recognize each other at all.

Aaron competed on the men’s gymnastics team and Caroline danced with the Diamond Gems. While they were acquaintances through mutual friends, their relationship stopped there. It wasn’t until after Aaron graduated in 1999 that their paths crossed once again.

Coming from a family of gymnasts, Aaron practiced and competed in gymnastics for most of his life. His mother and father owned a gym in Amherst, Mass., where he and his two siblings, Talya and Luke, spent much of their time.

“There’s a picture of me on a trampoline with my big pregnant belly,” Ann Vexler, Aaron’s mother, said. “He was doing gymnastics before he was born. He literally spent his whole life in a gym.”

After he felt he maximized his skill and talent, Aaron retired from the sport at the age of 23. But he couldn’t end his routine there, so he searched for other ways to incorporate gymnastics into his life.

“It took me a while to figure out how to actually pursue it,” he said.

For his first job out of college, he worked on the Celebrity Galaxy Cruise ship as an acrobatic performer and travelled to San Juan, Barbados, St. Thomas and St. Martin on seven-day voyages. He then moved to New York and joined the circus with a performance company called Antigravity. He performed with Spider-Man Live! A Family Stunt Spectacular and Batman vs. Catwoman at Six Flags Great Adventure, then started his own circus troupe with former Temple gymnast Mike Moran called Axiom Entertainment, Inc.

After working an office job for a year following graduation with a degree in modern dance, Caroline realized she could never again work the nine-to-five. She decided to move to New York to perform, but soon discovered that competition would be fiercer than she expected.

“I realized that if I wanted to work in the performance industry, that I’d have to develop special skills,” she said.

She and Aaron remained in contact after working together at a summer restaurant job at Katmandu.

“I was a waitress and he worked in security,” she said.

After a phone call to Aaron, she too joined Antigravity, specializing in aerial arts. Their relationship grew from there. Their marriage three years ago also marked the beginning of their careers in the stunt industry.

Aaron began working his way through the industry a year before Caroline. When stunts people look for work in TV or film, they typically approach stunt coordinators on set with their headshots and resumes after first becoming a member of the Screen Actors Guild.

“That was my biggest obstacle in my career,” Aaron said. “They’re trying to do work while you’re trying to bother them. I was pounding the pavement for six months before I got a job.”

Aaron said it became easier once he and Caroline began attacking sets together a year later. Caroline agreed, and said that their unified approach only works in certain circumstances.

“I wouldn’t go to sets with my friends who are blonde and 5-foot-4,” she said.

Their backgrounds in both gymnastics and dance helped to facilitate their transition into the stunt industry because they are constantly aware of body movement as performance art. However, stunts people come from various professions.

“People who do this kind of work come from diverse backgrounds,” Aaron said. “I’ve met some who are martial arts fighters, dirt bike racers, rodeo guys and firemen. Everyone sort of finds their expertise.”

Though their training gives them a leg up, both Aaron and Caroline have taken driving, safety and acting classes for additional training to help with their skills. While stunts people fail to fit into a certain mold, most lean toward the adventurous side.

“There’s definitely an element of that,” Aaron said.

He has thrown his body down flights of stairs, dropped 30 feet through midair, lit himself on fire and fell through a glass window naked. However, stunts must be carefully planned and executed.

Though both are extremely immersed in the world of celebrities, neither Aaron nor Caroline desires to blow up their star. In the stunting world, it’s actually better if people don’t know who you are.

“The greatest compliment you can get is for the actor to claim that they do all their own stunts,” Aaron said.

Their passion for risk and performing allows them to share a professional life together, which can be convenient considering the odd hours of the stunt profession.

“Sometimes we’ll start at eight at night and shoot until six in the morning,” Caroline said.

Aaron’s brother Luke Vexler – a senior at Temple and also a member of the men’s gymnastics team – said that stunting fits flawlessly with Aaron’s personality.

“Our entire lives have revolved around gymnastics and body movement. His job is just a continuation of that,” he said.

As for Aaron and Caroline working as a team in the industry, Luke said there couldn’t be a better match.

“They’re perfect for each other,” he said. “The coolest stunt I’ve seen her do is jump through this glass skylight. It was pretty bada–. She’s right alongside with him, she’s perfect for stunts. The two of them are just amazing at their jobs.”

For their upcoming projects in 2008, Aaron will appear in Indiana Jones and the Kingdom of the Crystal Skull, Pink Panther 2 and Leatherheads; Caroline will appear in Fighting, Ghost Town and Righteous Kill; and both will appear in Don’t Mess with the Zohan, Body of Lies and Brooklyn to Manhattan.

As for their futures in the industry, both said they want to hone and broaden their skills to become well-rounded performers.

“I just want to keep doing stunt work and perfecting my craft, learn more about the business and continue to work with my wife,” Aaron said. “Every day is such a challenge that I don’t need to concern myself with future goals.”

Leigh Zaleski can be reached at
leigh.zaleski@temple.edu.