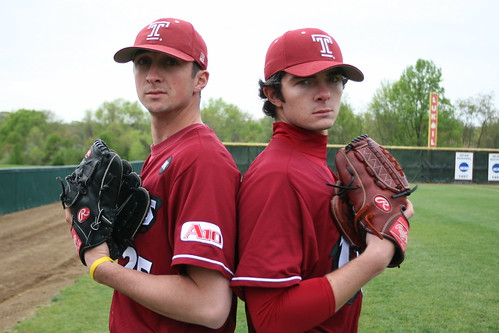 As a sophomore in high school, Matt Mongiardini got called up from the junior varsity baseball team to the varsity squad.
When he joined the team, he saw a familiar face. One so familiar that he saw it every morning before he went to school.

It was the face of his brother, Mike , who was a senior and a starting pitcher for Toms River East High in New Jersey.
The first time Matt played with his older sibling, he secured a save by finishing out a game that Mike started.

Five years later, they are back together sharing the hill as starting pitchers for the Owls (20-21, 11-7 in the Atlantic Ten Conference).
Both Mike, 23, and Matt, 21, said they enjoy the rare opportunity to play on the same collegiate team together.

“I enjoy it,” Mike, a southpaw graduate student, said. “We don’t try to one up each other. We try to help each other.”

Mike, who is in his first and only season with the Owls after pitching for Yale from 2004 to 2006, received his undergraduate degree at that university but was forced to sit out his senior year due to Tommy John surgery. Mike isn’t the only Mongiardini to undergo Tommy John surgery.

Matt, who is playing in his second season for the Owls after throwing for Gloucester County Community College as a freshman, underwent the procedure after his junior year at Toms River. The younger brother was able to give Mike some advice after he had his arm repaired.

“It’s funny. Being older, I was always the one helping,” Mike said. “But after surgery, I looked at him for guidance. And he was a big help. Every time I threw I thought I tore something or was having a setback, but Matt told me it was normal.”
Being supportive and helpful is not uncommon for the brothers.

“When I’m pitching, I hear his voice,” Mike said. “I can hear it in my head and from the dugout. I know [Matt] feels the same way.”
The bond they have is felt around the entire team.

“Mike is a great pitcher. He uses location to get his outs,” said Obal, who catches the majority of the brothers’ games. “Matt is a little different. His pitches have a lot more movement. Both of them are so competitive. It rubs off on us and helps keep us in games. We have a shot to win when either of them is on the mound.”

As much as they have in common, there are some differences between these brothers.

“Mike has a degree from Yale and I am just trying to pass my Italian class,” Matt said jokingly.
“Matt is way more outgoing,” Mike said. “He likes to go out and have fun.”

Mike and Matt would both enjoy a future in baseball but know the chances are slim. Therefore, they are enjoying this season to the fullest.

“We are roommates, we are teammates and we are best friends,” Mike said.

TOUGH WEEK FOR OWLS
The Owls went 1-4 last week and were swept in a three-game home series against visiting Fordham, losing 9-1, 9-5 and 8-5. Temple is now in fourth place in the A-10 standings.

Sunday’s 8-5 loss to Fordham marked the end of Temple’s 12-game homestand. They went 6-6 over that span.

The Owls will play a non-conference game against Lafayette in Easton, Pa. tomorrow before traveling to Arlington, Va. to face George Washington in a three-game series over the weekend.

MCKOY’S HITTIN’
Freshman outfielder Byron McKoy, who was co-A-10 Rookie of the Week last week, has an 11-game hitting streak going into the Owls next game at Lafayette Wednesday.

McKoy is hitting .489 since the start of the streak to increase his team-high season average to .366 through Monday. He is the only everyday player batting over .300 for the Owls.

REMEMBERING JOHN MARZANO
The Owls will honor John Marzano, a former Temple catcher who played 10 years in the Major Leagues, and passed away April 19, by wearing a patch on the front of their jerseys with the initials “JM” on it.

Marzano, a 1998 inductee in the Temple Athletics Hall of Fame, played for the Boston Red Sox, Texas Rangers and Seattle Mariners and worked as a broadcaster for Comcast SportsNet, 610 WIP-AM and MLB.com after his MLB career ended.

“Mr. Marzano was a great guy to talk baseball with,” Matt said. “I had the honor of meeting him once. He was really a down-to-earth guy.”

Vote Again: After poor turnout, a run-off tomorrow will be worse.

Here we go again – it’s time to go to the polls. Don’t worry, this isn’t a misplaced editorial from last week. Tomorrow, students will cast their ballots for Temple Student Government’s executive board –