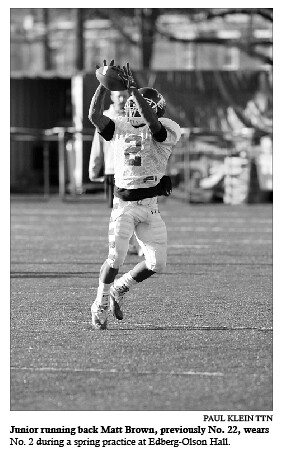 He exploded up the middle and dashed his way to a touchdown in the fourth quarter of a blowout 42-14 win against Army on Nov. 19, 2011, in typical form for the elusive junior running back, who finished with 133 yards and two touchdowns in that game.

On the next drive, then-junior running back Bernard Pierce broke a 49-yard score of his own, one-upping Brown on his way to 157 yards and three touchdowns on the day.

Pierce’s performance perfectly summarized the agony that was Brown’s season last year, who, despite averaging more yards per carry and playing in more games, would always be second fiddle to the National Football League-bound Pierce.

“The competition is good,” Brown told The Temple News after the Army game. “It brings out the best in us.”

But when asked about playing behind Pierce last season at spring practice last week, Brown opened up about his frustrations, which he said he felt “all the time.”

“It’s just what you have to deal with when you have a player as good as [Pierce] was in front of you,” Brown said. “But I took my beating, I worked through it and now it’s my turn.”

Brown rushed for 947 yards and six touchdowns last season as the backup running back. Pierce gained 1518 yards and scored 27 touchdowns, breaking every Temple rushing record along the way, and is now projected to be an early-round pick the NFL Draft on April 26.

“I want to see [Brown] keep competing and keep doing right, on and off the field,” Addazio said. “Everything’s earned and nothing’s given. Right now he’s earned the right to be called the starter, and if he doesn’t handle that well, that will absolutely be taken away.”

Brown will head an inexperienced backfield that includes two redshirt freshmen, a junior-college transfer and a converted quarterback.

Sophomore Kenneth Harper had the most carries last year of any returning backup, with 33 attempts in 13 games. Addazio said sophomore Jalen Fitzpatrick, who played quarterback in high school and is listed as a wide receiver, could see time as a hybrid between a tailback and an inside wide receiver. Redshirt freshmen Spencer Reid and Hassan Dixon and senior transfer Darius Johnson will also compete for carries, with Reid likely taking the third spot behind Brown and Harper.

“I think we’ve seen great progress by Harper, Reid and  Fitzpatrick,” Addazio said. “I’m really pleased with it. I like where that’s headed a lot.”

“I just think it’s great when you have playmakers, more than one playmaker, and you’re going to utilize everybody,” Addazio added. “We have a bunch of tailbacks, guys that are playing that hybrid tailback and inside receiver position, so that’ll give us the opportunity to really spread the field and hold the defense accountable.”

Addazio said the offense, which ran the ball the fifth most in the country last year, will likely be more balanced this season as redshirt-sophmore quarterback Chris Coyer has gained experience as the starter. Addazio will run the spread with Coyer, who ran for 608 yards last year, but said Brown could get 20-30 carries a game.

“It depends, but sure, it could happen for sure,” Addazio said. “There were games where [Brown had 20 carries] last year. It certainly could happen, but I would suggest to you that we’ll be a little more balanced with the carries. The quarterback will carry the ball this year more. When you sort that all through, I don’t know what the ratio will be, but it probably won’t be as heavily skewed.”

Coyer said that Brown’s explosiveness isn’t merely reflected by how he runs the ball. He is one of the most energetic leaders on the team.

“As a player, [Brown’s] incredibly versatile and explosive. The guy has one of the quickest first steps I’ve ever seen,” Coyer said. “As far as a teammate, he really brings such an energy to the huddle and the field. It’s a competitive edge that makes him really fun to play with and it really uplifts the entire team.”

“I’m just out there in my world,” Brown added. “The field is like my playground. To me, it’s all fun and the love of the game.”

Now, after three years of being second to Pierce, Brown finds himself as the starting running back of a Big East football team.

“I’m too excited,” Brown said. “I have never been this excited in my life. I’m ready to make it happen.”

Redshirt-junior quarterback Mike Gerardi makes his collegiate debut to guide the Owls to a homecoming win over Bowling Green. It took just three passing attempts for coach Al Golden to realize he needed to make

Owls get back to .500 with homecoming win

Temple’s offense took control to help lead the Owls to a 48-20 victory against the University of North Carolina at Charlotte on Saturday at Lincoln Financial Field.

Added to the lease while the university evaluates the feasibility of an on-campus stadium, the two consecutive one-year options mean the Owls could play at Lincoln Financial Field in 2018 and 2019.