After losing university recognition in 2004, the Alpha Delta chapter of Pi Lambda Phi has returned to Main Campus with a fresh vision and new goals.

Pi Lambda Phi is back. The fraternity, which lost its Temple recognition in 2004 and its national recognition in 2006, has officially recolonized on Temple’s campus, and its members hope for full organizational status by the end of the academic year. Members and organizers said they’re making the most of their second chance. 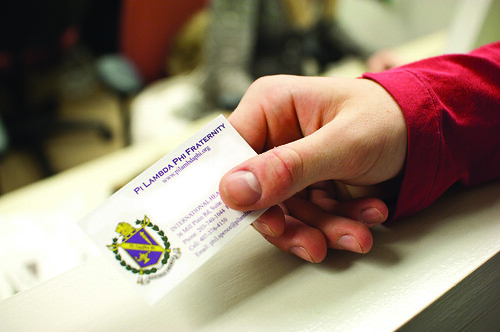 “We are dedicated to [making] sure this is started right,” said Ian Lowe, director of expansion for the fraternity, who works out of Pi Lambda Phi’s international headquarters in Danbury, Conn. “We’ve brought in a whole new group of guys who are well-rounded leaders and who want Pi Lambda Phi to be synonymous with great men who exhibit great character.”

The Alpha Delta chapter of Pi Lambda Phi lost its university recognition in 2004 due to multiple offenses, including providing alcohol to minors, failure to comply with Pennsylvania state law and failure to adhere to local fire and health codes.

At that point, members of the international headquarters were notified and attempted to resolve these issues by working with members of Temple’s chapter. However, Lowe said, the members at the time weren’t interested in changing their ways.

“The undergraduate members didn’t want to move in a direction that was conducive with the fraternal values of the organization, so headquarters decided to stop recognizing them and abolished the chapter here,” Lowe said. “We decided it would be best to let some time pass and work to build a better relationship with the community here.”

While five years might not have been the time they planned for, with the help of Lowe and Expansion Coordinator Phillip Spence, the fraternity is coming back to Main Campus. Lowe will be living in an off-campus apartment for the duration of the school year to help the organization.

“What we’ve tried to do with this new group of guys is focus strongly on our values,” Spence said. “We don’t just ask people if they’d like to join a fraternity – we present our values and ask what type of values they have, so we can make sure that we’re aligned.”

Those values – academics, leadership and service to community – are what brought in two of Pi Lambda Phi’s newest members, Andrew Bollinger and Nate Moore, the pair said. Moore, a sophomore chemistry major, said he had never considered Greek life before but sat down with Lowe and Spence and was immediately interested in joining the organization.

“It’s been great meeting new guys and being considered part of a group of really classy gentlemen, who put academics first and give back to the community,” Moore said. “I also liked the idea of being able to consider myself a founder of this new era of Pi Lambda Phi.”

Bollinger, a junior political science major, said after reaching out to Pi Lambda Phi through the organization’s Web site, he was contacted almost instantly by Lowe. Bollinger said since joining the organization last month, he has been able to not only help develop Pi Lambda Phi, but develop his own confidence and personal skills as well.

“We’ve been going out, interviewing guys, finding people that don’t just want to party, but guys that reflect our values,” Bollinger said. “And it’s been fun for me because I never really had experience in public speaking, but now I’m talking in front of huge groups trying to recruit for the organization.”

Both Moore and Bollinger said they have high hopes for the organization but understand it might take time.

“I’m excited, and I think we’ve got a lot of potential,” Bollinger said. “I feel like I can trust everyone that’s a part of this organization, and it’s looking great. I can’t wait till we’re at our full potential, and I’m already looking forward to competing for chapter of the year.”

Pi Lambda Phi’s members are working hard to regain a positive image with university administration, other students and the community. Bollinger said the fraternity is looking forward to working with all types of Greek and non-Greek organizations, and Lowe said they have already begun putting a Pi Lambda Phi alumni advisory board in place to help the fraternity stay on track after he and Spence are gone.

“We’re fortunate to have over 900 alumni from this chapter alone,” Lowe said. “So hopefully when headquarters staff pulls away, this chapter can still strive forward and will have the proper training and opportunities to network to be able to take it to new heights each and every year.”

Lowe added that certain study hours and other requirements will be put in place so the fraternity has a greater chance of succeeding.

Christopher Carey, advisor to Temple’s Interfraternity Council, explained that they will also be implementing programs to help Pi Lambda Phi and other fraternities do well.

“Jayne Appley, the program coordinator for Greek Life, and I are hosting a number of workshops, conferences and meetings with both leaders and new members in the Greek community,” Carey said in an e-mail. “The intended outcome of these programs is to provide everyone the tools and a plan to live according to their values and provide a positive impact on campus life.”

Lowe said it should just be a matter of some procedural paperwork before Pi Lambda Phi is able to petition the IFC for full recognition. But for now, he said they have already been welcomed back and will relish their second chance.

Gabriel Katz can be reached at gabriel.katz@temple.edu.

Temple’s Panhellenic Council will no longer associate with the fraternity.

Greek life has increase in GPA

Since deferred recruitment was introduced in 2015, sororities and fraternities have increased their GPAs and membership.

Brotherhood is no longer ‘no girls allowed’

APO is a co-ed fraternity that aims to serve the community.