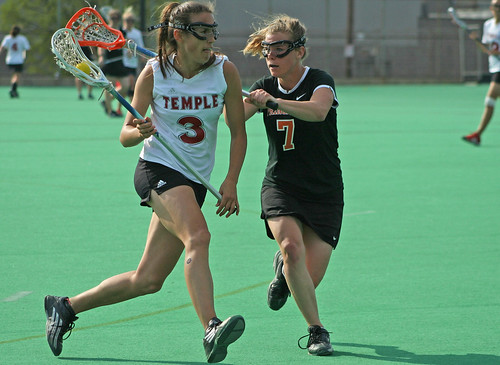 Last Wednesday, the Owls dropped their game to No. 6 Princeton, 15-7. The outcome wasn’t what they had hoped for on the team’s Senior Day.

But Sunday was the day seniors Whitney Richards and Nicole Caniglia really dreamed of.

A 10-3 victory over fourth-seeded Massachusetts in the Atlantic Ten Conference Championship game was enough to erase Wednesday’s loss from memory. With the win, the Owls secured their fifth A-10 Championship in program history and a berth in the 16-team NCAA Tournament, which begins May 11.

Richards scored two goals and Caniglia added another, along with an assist to help lead the No. 2 Owls to their first A-10 title since 2004 at McGuirk Stadium in Amherst, Mass.

Temple jumped out to a 6-0 lead at halftime and didn’t look back. The Owls added four more in the second half as they improved to 13-5 overall.

“Pretty much what we’ve been wanting since we got here,” Richards said. “It feels awesome. I don’t know if it has completely sunk in yet.”

Both Richards and Caniglia arrived on North Broad Street a year after the title victory in 2005. Prior to the seniors’ arrival, the Owls had won four consecutive conference championships from 2001 to 2004 under former coach Kim Ciarrocca.

Richards and Caniglia waited to the end of their careers to carry the title of A-10 champions, but they said that’s fine with them.
“It is like the best feeling,” Caniglia said. “It feels like a weight has been lifted off our shoulders especially since we’ve been so close for the past three years.”

Temple finished the regular season with an 11-5 record. The Owls rode a six-game winning streak in the middle of the season and finished 6-1 in conference play, which was good for a share of the regular-season conference title.

“We had a talented team and a very experienced returning senior class that was driven to be successful. The whole season was really about taking things one step at a time,” second-year coach Bonnie Rosen said. “This whole weekend was a continuation of what we’ve been doing all season. The team has been really great at taking one game at a time.”

The Owls defeated Duquesne, 14-10 in the semifinals before taking on Massachusetts in the title game.

Against UMass, junior Britney Hoffman led the Owls with four goals, as they forced 10 turnovers to shut the Minutewomen out in the first half.

“We really just played to our game. We ran our offense well and our defense played really well,” Caniglia said.
Last season did not have quite the same ending.

Despite finishing 6-11, a 4-3 conference record earned the Owls a berth in the A-10 tournament. They lost to Richmond, 13-6, in the semifinals to come a game short of playing for a conference championship.

“I think the lesson was learned on that last day,” Rosen said. “This year is a new year. Everyone was ready. It hasn’t been a carry over, yet I do think that there is a feeling of redemption this year.”

Specifically, it was a chance for the seniors to redeem themselves and go out in style.

“All [of us] got on the same page, we wanted to take this year one game at a time,” Richards said.

Caniglia finished sixth in the A-10 with 35 goals and 10th in the conference in total points.

Entering the season, she said it was the seniors’ duty to help mentor and bring along the underclassmen so they could make one last title run.

“We feel that our experience and work ethic would rub off on the underclassmen and it has throughout the year,” Caniglia said.
“Senior leadership has been the key to our season,” Rosen said. “It has been the force behind their desire to want to take this team back to the A-10’s and to an A-10 Championship and to restore the pride in Temple lacrosse has been a really big motivating factor all season.”

Richards looked motivated all season as she led the Owls with 39 goals in the regular season, which placed her fifth in the conference. She was third in the A-10 with 31 assists for a total 70 points.

“[She’s] consistently strong,” Rosen said. “[She is] the go-to player and everyone knows it and it still hasn’t stopped her. She’s been unselfish yet willing to be a huge leader at all times.”

Richards’ production, unselfishness and leadership skills earned her a spot on the A-10 First Team along with Caniglia and senior Berkley Summerlin.

“It’s nice recognition, but there’s more to the season,” said Richards, who was named the tournament’s Most Outstanding Player. “The most important thing was that we won.”

Rosen also earned some hardware, winning A-10 Coach of the Year. Like her players, she’s quick to overlook the personal accolades.
“That honor is wonderful recognition of what this team has accomplished this year,” she said.

“It’s been a thrill to be at Temple. This has been a great ride this season … Watching this team believe in themselves and watching them smile at the end of [the championship] game is the greatest gift a coach can have.”

A gift that comes along with winning the Atlantic-10 Tournament is an automatic berth to the NCAA Tournament. The last time that Owls made a trip to the tournament they lost to Maryland, 22-4, in the first round.

“I can’t wait to take our team there and see what we can accomplish,” Rosen said. “I don’t really know how words can describe how excited [we are] for what we’ve done and what lies ahead.”

His eyes are on the prize

The fun-loving senior is looking to add to the tradition of great guard play at Temple.

Owls back their way into A-10 tournament after a frustrating season wrought with losses.

Most people can’t become engaged in a work of art unless it speaks to them. It must be at least relatable, even if not completely realistic. Human nature renders most people emotionally distanced from things