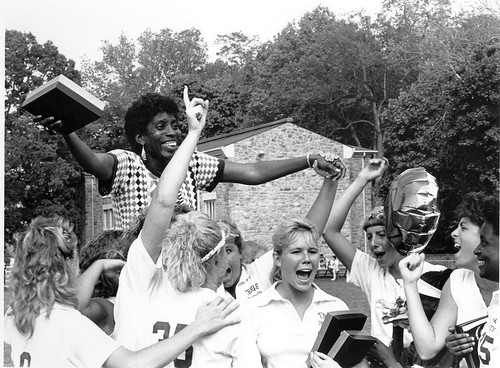 Twenty years ago, the women’s lacrosse team accomplished something that no Temple sport has since.
They won a national championship.

“As a Temple alum, it feels pretty special to be the last ones to have done it because there have been so many great teams,” said Gail Cummings-Danson, a member of the 1988 team and now the athletics director at Skidmore College. “We were on our own little mission that year.  We knew what we needed to do to get it done.”

The title-winning team went 19-0 as an independent that season on their way to their second national championship. The Owls previously won the crown in 1984.

The year before their 15-7 victory in the 1988 national championship game, the Owls watched their perfect season slip away with a 7-6 loss to the Penn State Nittany Lions in the finals.  The next season, the team again took an undefeated record of 18-0 into the championship game.

Their opponent?  The Lions.

“It was definitely devastating and frustrating when we walked off the field after that loss,” current University of Florida women’s lacrosse coach Amanda O’Leary said. “But it meant a lot more playing against them and getting the opportunity to avenge our loss.  There aren’t too many times you get to satisfy that feeling.”

“Penn State was a thorn in our side,” said Barbara Questa, who is now St. Bonaventure’s senior associate athletics director.
“We played such different styles,” she said. “They wore ribbons and bows in their hair, used wooden sticks, and stalled the ball.  We used molded-head sticks and were aggressive and fast-paced.  As a defender, though, I honestly never panicked that we wouldn’t win the game with players like Kim and Gail.”

Cummings-Danson and Kim Ciarrocca, now the women’s lacrosse coach at the University of Delaware, were just two of six all-Americans from that 1988 Temple squad, which returned all but one player from the previous year’s starting lineup.
O’Leary, who was also the Midfielder of the Year in 1988, Questa, Kelly Grimm and Denise Bourassa rounded out the other four.
“Those players were a coaching dream,” former coach Tina Sloan Green said.

Green, the first coach in Temple lacrosse history, roamed the sidelines for the Owls from 1975 to 1992.
“They were tremendous leaders on and off the field and when they walked on the field that day [in 1988 against Penn State], they knew exactly what they needed to do,” she said.

Cummings-Danson led the way in that game versus Penn State, scoring four goals, three of them in the nine-goal first half.  She ended her senior year in 1988 by scoring a program-record 88 goals in a season and NCAA-best 289 goals in her career.

“You don’t do those things by yourself,” Cummings-Danson said.  “Somebody had to get me the ball.  No individual was going to win that championship for us.  It was teamwork and those relationships, those bonds, with the team will never be broken and will never die.”

To this day many of the former players still keep in touch, attending the National Lacrosse Hall of Fame inductions of Sloan Green, O’Leary, and Cummings-Danson in 1997, 2005, and 2007, respectively.

And, of course, they all still wear those championship rings.

“It was one of the best moments of my life,” Ciarrocca said, referring to the 1988 national championship.  “It’s probably third after my children and my marriage.  And what made it even more special was that the team was friends on and off the field and we’ve kept in touch up to now.  If I had the chance, I’d do it all over again.”

BACK TO THE FUTURE
The current Temple women’s lacrosse team continued its quest toward making the NCAA Tournament for the first time since 2004 by beating the visiting Villanova, 21-7, at Geasey Field Saturday.

Senior attacker Nicole Caniglia and senior midfielders Whitney Richards and Berkley Summerlin scored 14 of the team’s 21 goals on their Senior Day.  Of those 14, a career-high seven came from the hands of Summerlin.

The Owls (11-4, 6-1 in the Atlantic Ten Conference) trailed only once in the game, when Villanova (4-11) scored the first goal two minutes and 39 seconds into the match.

Temple then went on two separate runs of four and five goals, respectively, to take a 13-5 lead into halftime.

After back-and-forth scoring early on in the second half, the Owls scored the final five goals of the game.

Jennifer Reardon can be reached at   jennifer.reardon@temple.edu.

Editor: We, the student government leaders of colleges in the Philadelphia region, endorse Sen. Barack Obama as the candidate of our choice for the Democratic candidate for U.S. president. Firstly, we must note that we

Last Wednesday, the Owls dropped their game to No. 6 Princeton, 15-7. The outcome wasn’t what they had hoped for on the team’s Senior Day. But Sunday was the day seniors Whitney Richards and Nicole

Freshman-laden lacrosse squad is ready for A-10 title defense

Coach Bonnie Rosen led the Owls to the conference championship last season. But now, they look to retain the crown with nine rookies on the team roster.