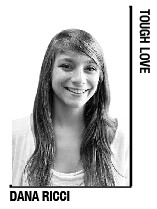 This week columnist Dana Ricci looks back on bad breakup experiences and devises a code for making breakups go smoothly and hurt less.

I’ve been there before: Lost in the post-breakup heart haze, baffled and disappointed, wondering why that “good riddance” feeling I was hoping for hasn’t set in yet. I’ll be staring at my cell phone thinking, “Well, who now is going to text me to say ‘good morning?’”

While things eventually go back to normal, when a breakup is fresh many people may be left with a pit in their stomach and a hole in their heart. This pesky heart-hole can make even the most sensible young adults act well, slightly crazy, and make decisions that may end up hurting their feelings–and sometimes their dignities–even more.

What follows is what I like to call “The Rules of Breakup.” These little tips are all based on some adverse incidents in “Breakup Hell” my friends and I have gone through. You don’t want to go down in history as another crazy ex, and more importantly, you don’t want to make the sticky breakup situation hurt you more than it should.

This one is probably the most important. I know what you may be thinking–“But my ex and I are just friends now and everything is fine. There’s no pressure.” Some of the most dramatic and unpleasant friendships I’ve ever seen and been in have been between ex-couples. So pretend there’s no email, telephones, Facebook, snail mail, telegrams, carrier pigeons or any other sort of ways that humans get in contact with their exes, at least for a little while. Keeping in touch too soon when wounds are still fresh often opens them back up. Sure, you’ve become accustomed to hearing from someone after you’ve dated them, but it is necessary to fight that urge to keep in contact if you don’t want a percentage of these “friendly” chats to end in tears and arguments.

Part of breaking up involves not seeing or speaking to each other. This goes for the ‘dumpees’ singing the breakup blues, as well as the ‘dumpers’ who are having second thoughts. Dumpees: Someone just considered all of your traits and decided not to be with you anymore, so why would you want anything to do with that person? Dumpers: You can’t go back and fourth with people’s emotions like that without ultimately being a jerk. In time perhaps the awkwardness will subside, hearts will mend and things can be somewhat normal. However, upon breaking up it’s necessary to get your previous other half out of your life for a while and focus on you.

So maybe you haven’t done such a great job following Rule #1 and you’ve found yourself having sexual encounters with your ex. Sure, you may be doing it with the same no-strings-attached approach that you would have with any other person you would find yourself having sex with, and hey, bonus points in this case because you’ve already seen each other naked. Unfortunately, such is not the case. Many couples end up having sex after they break up because it’s familiar. It’s a way to ease a heavy heart that’s newly beating on its own and all these feelings make it passionate and dramatic, almost irresistible in bed. However, there’s almost no better way of sending off mixed messages, complicating things and hurting feelings than having post-breakup sex. While it can be good in the moment, breakup sex leaves most of us feeling worse in the aftermath.

Rule #3: Let his or her Internet accounts die

The Internet has made almost everyone stalk-able from the comfort of your computer chair. It’s tempting to check out your ex’s Facebook profile or go through their email accounts (You still have the password, don’t you?) to see if they have a new fling, or worse, had one before the breakup went Facebook official. However, the information can probably only sadden you more. It’s funny how even a Facebook picture of an ex having a good time without you can bring up bad feelings.

Also, if you happen to have their passwords you should do your best to forget them and stay out of their personal accounts. A friend of mine was able to tell that his ex girlfriend recently meddled with his Facebook and Twitter accounts–it’s not hard to figure out–and it only made her look bad. Even if the answers to the failed love lie somewhere in the web interface, stop yourself from getting involved in Internet ‘stalkery’. Perhaps what’s out there isn’t worth knowing.

Don’t try and convince yourself it’s only a break and in time, you’ll both realize you’re still madly in love and get back together. While sometimes this happens for broken-up couples, don’t assume it will happen to you. If it doesn’t, you may be more disappointed than you were at the initial breakup. Also, don’t expect that once you’ve both moved on you’ll be buddies. In situations where two people have been intimate for a long time, it can be impossible to have a normal friendship, despite how well you both know each other.

While some of these rules may seem obvious, people constantly go through problems that involve these sorts of things. Try and remember why the relationship ended in the first place. Focus on moving on and being happy on your own rather than on mucking around in a past failed relationship.

Dana Ricci can be reached at
dana.ricci@temple.edu.

In her final “Tough Love,” columnist Dana Ricci reflects on the validity and possibility of college relationships, and says “goodbye” to her readers. In many relationships, there comes a time to say goodbye. There comes

Resolve to take the lone road

Columnist Dana Ricci advocates finding happiness within one’s self before seeking it within a significant other. Is it just me, or is what I thought was “breakup season,” as in May through July, happening in

Dana Ricci discusses her personal woes and successes of others when it comes to long-distance relationships. Absence makes my heart want to burn your house down. Well, not really. I just have this thing with