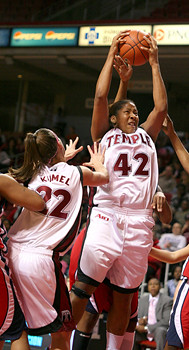 Temple women’s basketball senior Lady Comfort signed a one-year rookie contract with the WNBA’s Los Angeles Sparks today to become the third Owl in three years to join the 11-year-old league’s ranks. Candice Dupree of the Chicago Sky and Kamesha Hairston of the Connecticut Sun were drafted in 2006 and 2007, respectively.

The 6-foot-2 center will compete for a spot on the Sparks roster with the team’s three 2008 draft picks including the No. 1 overall selection, Candace Parker.

Comfort, a Pensacola, Fl. native who is Temple’s all-time leader in career field goal percentage (53 percent), averaged 9.4 points and a career-high 8.4 rebounds while shooting 46 percent from the floor during her senior campaign. She was named to the Atlantic Ten Conference’s Second Team and All-Tournament team at the end of the season.

In her four seasons at Temple, Comfort averaged 7.9 points and six rebounds per game. She was voted the 2007 A-10 Most Improved Player after averaging a career-high 12.7 points as a junior.

As reported by The Temple News, Comfort said she spoke to Sparks coaches when she attended a two-day WNBA pre-draft camp in Tampa, Fl. earlier this month. She said playing with Dupree and Hairston and under coach Dawn Staley, a former WNBA player herself, helped her “get to where I am now.”

“[I’m] just following in their footsteps,” she said while at the camp.

One of the WNBA’s eight original teams, the Sparks won league championships in 2001 and 2002. The squad, which is coached by Michael Cooper, includes three-time league MVP Lisa Leslie and six-time all-star Taj McWilliams-Franklin.

A WNBA rookie contract is worth $34,500 per season, according to the league’s collective bargaining agreement.

Tyson McCloud can be reached at Tyson@temple.edu.

She shoots and she scores. It’s a familiar phrase these days for the women’s lacrosse team, which, through Sunday, is converting 50 percent of its shots — up from 36.1 percent a season ago —

School of Law gets new dean

The search for a new dean of Temple’s James E. Beasley School of Law ended with President Ann Weaver Hart’s announcement that JoAnne A. Epps, currently associate dean for academic affairs of the law school,

Editor: [In response to [“Joe Frazier’s Gym closes for renovations,” Christopher Wink, April 3, 2008] Speaking as boxer Marianne Marston, I can personally confirm I am not returning to London, whatever Mr. Leslie Wolff says