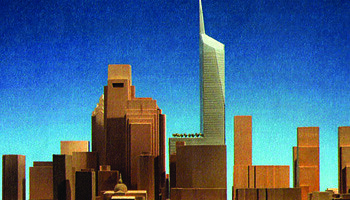 Philadelphia has belabored for all too long under its reputation as a second-class city. Poverty, economic deterioration, abandonment and crime have overshadowed our history and size. A proposed 1,500-foot skyscraper, termed the American Commerce Center could change all that.

As superficial as it may seem, skyscrapers lend legitimacy to downtown areas. They are not mere buildings, they are trophies of a city’s success and impart a sense of stability to investors. While Philadelphia is the critical hub to a suburban area encompassing more than 6 million residents, it does not have an equivalent reputation.

The view of Philadelphia as a substandard metropolis instead of a giant of urban America is not wholly without merit. Indeed, decades of mismanaged government, a botched transition from a working class to a white-collar economy and a world renowned surliness are not mere apparitions.

However, less important to many outsiders than statistics is Philadelphia’s appearance. When visitors and investors come to Philadelphia they are much less aware of our history and the true conditions of the city than our downtown’s appearance. And while Center City has made great strides in recent years, our reluctance to begin building skyscrapers until 1985 has left us behind other major financial centers.

Although many criticize the Philadelphia municipal government’s focus on our downtown, I believe that we must continue to strengthen the perception that Center City is succeeding and growing. While the very real problems plaguing our city must be addressed, the reality is that they will not be resolved within any short-term timeline, and certainly not while our city sits on the brink of financial collapse.

I see the American Commerce Center proposal as a critical step in rebuilding our reputation. Standing 500 feet taller than the nearly completed Comcast Center, the building would be taller than the Empire State Building and would truly create a centerpiece to our skyline. While I again acknowledge the patent superficiality of considering only the image of the building itself, the reality is that aesthetics are part and parcel to architecture and city planning.

City Hall is massive and ornately constructed for a reason. It shows that city government is both powerful and strongly rooted in Philadelphia. This again fosters a sense of legitimacy that is important in the minds of Philadelphians, and those who we need to attract to Philadelphia to bring financial stability back to the city. We cannot underestimate the impact our reputation outside of Philadelphia has on the city itself.

All that I would caution is that while I do believe we should be doing everything in our power to attract developments like the American Commerce Center, the city cannot ignore the larger problems at hand. Using giant buildings to impress outsiders is only a means to an end, like any other urban development strategy. The poverty, lack of education and crime that has engulfed many neighborhoods and stricken many black communities in particular will eventually destroy the city as a whole.

This problem cannot be shut away, but paradoxically cannot be resolved without outside investment. Downtown successes will be meaningless if they are not channeled into the galaxy of smaller neighborhoods outside of Center City.

Ryan Briggs can be reached at rwb@temple.edu.

Listen to audio and see video from celebrations on Main Campus and in Center City following Sen. Barack Obama’s election.