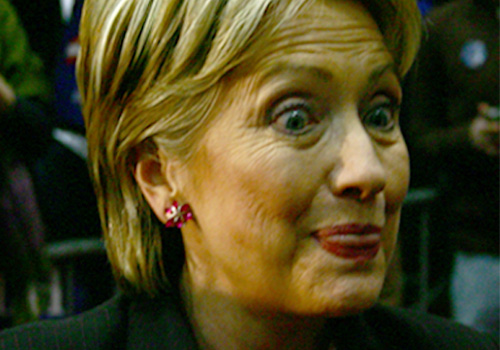 Apparently, Sen. Hillary Clinton was here at Temple two weeks ago. If you blinked, you probably missed her.

She came like a cat burglar in the night, while most students were away on their spring breaks, napping on their front lawns. In and out, with no damage done. You might want to check for your valuables.

If you’re concerned that you missed one of the momentous junctures in history, then you’ve nothing to worry about. She spouted the same rhetoric that we’ve been hearing the entire campaign, perhaps

with a little more spunk and urgency since she’s fallen behind in the delegate count.

If she held the rally while classes were in session, who knows what kind of chaos would have ensued – crowds, protests, maybe even – gasp – an impromptu Obama rally? In fact, the rally at McGonigle Hall is emblematic of her entire campaign.

She creates an artificial atmosphere to convey an image of cohesion for all the television cameras and plants questioners in her audience to praise her while accusing dissenters of being plants from the other side. It’s as though she’s been reading from former George W. Bush adviser Matthew Dowd’s playbook page for page.

Temple political science professor John Masker, while agreeing that she runs an image-obsessed campaign, is more cautious when assessing her decision to come to the university on spring break.

“I could hypothesize that (a) somebody didn’t bother to look at the schedule, or (b) that someone did look and thought it was ideal because there could have been some sort of counter rally, or (c) it was just her schedule and how it worked out,” Masker said.

While at Temple, she touted her experience in the Oval Office and raved about how we, the voters, must think about whom we want to hire for the “toughest job in the world.” If she’s referring to her relationship with Bill, then this is true. But if that is the case, why not just put Monica Lewinski on the ticket?

Bush Sr. waged a successful, swift and just war and the only reason the voters held a grudge against the man was because he raised taxes after his campaign platform was no new taxes. Remember, “Read my lips…”

Bill Clinton reigned in perhaps the easiest decade in American history to be president. In the ‘90s, the economy was strong and resilient, there were no foreign threats – or so we thought – and the people were content.

In fact, one could argue that Bill Clinton set up the economic conditions we now face with the establishment of NAFTA and that our current Middle Eastern conflicts are a product of his ignorance of Middle Eastern tensions.

But let’s not go there. How about we just release the oligarchic grip that threatens our democracy and pass the torch to a new era of politics? One that addresses the true ailments of our society, like race and inequality, with a transparency that leaves that no questions in our now dubious minds.

The Owls’ senior guard scored 39 points, but Temple allowed Cincinnati to shoot more than 50 percent from the field and score 50 points in the paint in the Bearcats’ 80-72 win on Saturday in Ohio.

Dems hold watch party for State of the Union

Attendees hailed the president for his positions on immigration reform.

Supporters of Sen. Barack Obama were outraged when MSNBC projected Sen. Hillary Clinton as the winner of the Pennsylvania primary. Obama fans filled the outdoor patio of Waterworks restaurant as they crowded around TVs, waiting