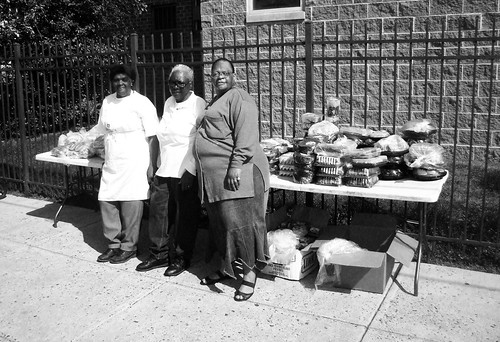 For the last 13 years, Tony Stamps has been helping those who are less fortunate, unable to afford adequate food.

Tony Stamps, born and raised in North Philadelphia, is a community member who saw a void in his community for quality, nutritious food. As a result, for the past 13 years Stamps and his faithful volunteers have been committed to fulfilling this need through collaboration and hard work.

“It’s simple. I started [the food drive] because it was a need for the community,” Stamps said. “I’ve been doing this for 13 years, and whether I’m out here or not, it’s still going to get done.”

Every Monday, rain or shine, Stamps and his volunteers set up alongside of Yorktown Arms, a senior rental community at 1400 N. 13th St., to distribute food at 11 a.m. While the organizers are small in numbers, their impact is felt. Like yesterday, April 16, the line extended beyond the block as people patiently waited to receive their ration of food for the day.

“People in this building, for example, are on a fixed income and after they pay their bills they are left with $8 to $12 a month for food,” Stamps said. “And what can they do with that?”

Stamps recalls that there was such a high need for food, at one time that he was unable to supply people with enough. Now, Stamps said that the food donations have become plentiful, and he and other organizers are able to distribute food at more than 13 food sites throughout the city of Philadelphia.

Stamps has developed strong relationships with supermarkets, which aid him in his efforts to feed the hungry.

“I go to different supermarkets and they throw away hundreds of thousands of dollars worth of food every day,” Stamps said. “Instead of [supermarkets] throwing away all of that food, I step in and ask for food donations, and I tell them what we are doing it for. Everyone likes to jump in for a good cause.”

“Whatever the stores provide us with, healthy foods or mostly organic, we give it out,” said Valerie Williams, a Philadelphia resident for more than 11 years and volunteer.

Some of the foods include fresh vegetables and fruit, bread, milk, eggs, cereal and canned goods.

The food drive continues to thrive with the support of food donations from those who are more fortunate.