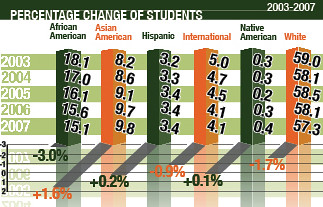 “One of the problems of a big urban university is that people are scattered,” said Tchet Dorman, director of the Office of Multicultural Affairs.

Dorman and his office are trying to help people on campus who better want to understand diversity issues at a time when some groups are coming head to head.
He is relying on student leaders to help bridge the gaps and unite students.

“We want to affirm the individual student organizations and communities but bring them all together,” Dorman said.

Nobumasa Hiroi, president of Temple’s Soka Gakkai, a Buddhist organization, said student groups have a lot of responsibility to make sure students feel comfortable on campus. He added that the OMCA is a good idea but isn’t enough.

“We have numerical diversity, but in terms of the program, the school doesn’t really have anything to help the diverse campus,” said Hiroi, a graduate student studying creative writing.
Deanna Wozniak, president of Temple’s Common Ground, agrees that Temple’s effort is lacking.

“They are doing a good job, but they could be doing more,” the junior biology major said. “Our resources can’t always compare to other schools, so they have to rely on student groups. They can’t expect us to do everything. We are still students.”

She said the Queer Café, an annual event open to the entire university community, is a good start, but the university should sponsor other events.

OMCA held a diversity dialogue as a continuing effort to connect with student leaders. Dorman said the office would like to have the dialogue again in the fall. There also was a student
leadership roundtable and unity week.

Lawrence Liu, president of the Asian Students Association, said OMCA is doing a commendable job. Even though there is hate, there are more good people here than not, he said.
“I feel as though stuff is going on, but not enough people know about it. The events are there. It is just that people have to be going to them,” said Liu, a senior kinesiology major.
Temple’s transition to a residential campus is making the need for diversity acceptance even more important, Dorman said.

“I think that’s why students come to Temple. They aren’t coming from diverse areas,” Dorman said. “One of the challenges for us is that people don’t know how to make those connections and interact with people who seem different from them.”

Reyna Florentino, a sophomore business major, is a member of the Asociacion de Estudiantes Latinos and said her group works to educate students about the Latino community.
“I think a lot of the courses that Temple offers help people understand other cultures,” Florentino said. “You start breaking stigmas when you start learning.”

Dorman said he has hope for the future of Temple’s diversity. The university has a supportive president and a supportive administration, he said.

“It is important for every student to understand diversity,” Dorman said. “We kind of have an integrationist philosophy – we think diversity should be integrated everywhere, and that’s what we’re working on.”

Baseball The Owls improved to 10-7 (3-0 Atlantic Ten Conference) after completing a series sweep of Rhode Island this weekend, scoring 27 runs over the three-game set. Temple is on a five-game winning streak to

A bull market can be seen right here at Temple, stemming from high demand of the business school’s economics department. The department will be transferred from the Fox School of Business and Management to the