For the first time since 1987, the football team had a player drafted in the first round of the National Football League Draft.

Junior defensive tackle Muhammad Wilkerson, who declared for the draft a year early, was selected 30th overall by the New York Jets, making him the first Owl to be a first-round selection since running back Paul Palmer was drafted by the Kansas City Chiefs with the 19th overall selection. 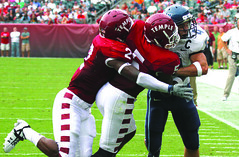 Wilkerson, the team’s defensive most valuable player and an All-Mid American Conference selection last season, impressed scouts with his combine results and was almost universally projected to be a first-round pick.

“I thought it was going to happen,” Wilkerson told reporters following the selection. “I had a great visit when I did the workout for them [earlier this month]. Once that 30th pick came around, I just had the feeling they were going to pick me up.”

Despite the foregone conclusion that he would be drafted, Wilkerson, the first player from a non-bowl championship series-affiliated conference selected, was still emotional upon being drafted.

“It’s a dream come true,” Wilkerson said. “One of my goals going into my sophomore year was to be a first- or second-round draft pick. Once my name was called, [I had] tears of joys from bringing in that moment with family and friends.”

Playing time is hardly guaranteed in the NFL, but draft experts are predicting Wilkerson could possibly slide into the Jets starting lineup right away, a notion that New York Jets coach Rex Ryan didn’t dismiss.

“I see him as a possible three-down contributor for us,” Ryan said, pointing to his work ethic. “He’s going to have to come in here and earn his reps, but we think he’s going to be an outstanding player.”

While Wilkerson doesn’t have to travel far for his new job, senior safety Jaiquawn Jarrett has an even shorter commute. The four-year starter and All-MAC selection was drafted in the second round by the Philadelphia Eagles with the 54th overall selection.

“It’s still taking some time to settle in,” Jarrett said in his introductory press conference. “My family and I are embracing it. You only get drafted once, so it’s a great opportunity for my family and I.”

Although Jarrett is originally from Brooklyn, N.Y., he has spent the last four years playing at Lincoln Financial Field, the Eagles stadium. With that in mind, at least the physical transition should be an easy one for Jarrett.

“This is like a dream come true,” Jarrett said. “I’ve been playing in Philadelphia for the past four years. This is a great coaching staff that loves me, and I love being here.”

One of the question marks regarding Jarrett was whether he had the speed to play at the next level. His 40-yard-dash time was 4.6 seconds, slower than an elite safety’s ideal time. However, Jarrett has been compared to former Eagle safety Brian Dawkins, who ran a 4.65 seconds coming out of college.

“That’s a privilege, just to be compared to such a [high] caliber player like Brian Dawkins, one of the best to ever play the game,” Jarrett said. “That tells you something about 40 [yard dash] times, though.”

A year after having no players drafted, the selections of Wilkerson and Jarrett put Temple in exclusive company as the Owls were just one of eight Division I programs to have a first- and second-round selection in this year’s draft. Along with Temple, California, Florida, Florida State, Illinois, North Carolina, Pittsburgh and Wisconsin accomplished the feat.

Senior linebacker Elijah Joseph, senior defensive tackle Elisha Joseph and senior offensive lineman Colin Madison failed to hear their names called over the weekend. While Elisha and Madison were considered long shots to be drafted, Elijah was projected by some to be a late-round selection. In a normal year, all three players would sign undrafted free agent contracts within a few days of the draft. However, with the NFL lockout, the players are left in limbo until a new collective bargaining agreement can be determined.

Electronic music festival brings the Cataracs, Switch, Shwayze and many more to the Great Plaza at Penn’s Landing this summer. Because everyone is looking for a good time this summer, the founders of Pixie &

The Temple News explores the history and process of the General Activity Fee. After finals end and summer begins, some student and department heads will remain on Main Campus discussing finances. This summer, as per

03 May 2011 Matt Finn Features, People You Should Know

A professor and his wife launched a jewelry company after winning the Be Your Own Boss Bowl. Jewelry is usually designed to shine, sparkle and dazzle. But when James Moustafellos, assistant Management Information Systems professor