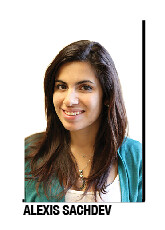 It’s Friday night in a basement somewhere near North Gratz and Berks streets. Cigarette and marijuana smoke devour the oxygen, so we retreat outside for the cliché and counterintuitive cigarette and fresh air. I turn to some friends, complaining that I haven’t heard from my –

Here’s where I stumble over my words. My face twists into a soured expression of confusion and curiosity. I’m never at a loss for words. That is, until now.

I realize there is no name for whatever this 6-foot, brown-haired boy is, with whom I’ve been spending my days.

He’s not my boyfriend, but we like each other. My “boo”? I’m not Usher. “Significant other” feels entirely too mature, “lover” is an exaggeration, I reserve “companion” for household pets and any moniker referencing sex is just not my style. What’s a kind-of-sort-of single girl to do?

We go out for Bonté waffles and both love Indian food, he teaches me how to long-board, I correct his grammar, we’ve met each other’s families, he makes sure I’m getting enough sleep and I nag him to finish his homework. In short, we care about each other. Yet I can’t figure out how to describe the company I keep with this hunky, blue-eyed goofball to my mom.

After you’ve taken a minute or two to puke up your breakfast at all this cuteness, remember that it is part of human nature to name everything. Each color, from seashell to sapphire, has a precise name. Kitchen utensils, diseases, animals – extinct and living – and that weird metal thing to measure your foot at a shoe store – every object and atom that surrounds us and consumes our lives has a name, and is classified in a larger named group, and the pattern continues.

Yet even in the English language – with its vastness and precision – we still tie our tongues when it comes to talking about love and lust.

As young adults, we often refer to our romantic ventures as “seeing each other,” “friends with benefits,” “dating,” “sleeping together” or “hooking up.”

Vague classifications such as these shirk  us  from any responsibility or commitment, and instead encourage the notion that these relationships are flighty, temporary and meaningless. There are no clearly marked boundaries, either. Is it an open relationship? Is it exclusive? When it’s time for the relationship to end, do you break up or just stop returning phone calls?

Even worse, when it does end, we go through the same run-around. We’ll “take breaks” – or a “hiatus” for the more eloquent folk – resolve to be “just friends” or straight up stop talking.

I don’t think this unclear terminology is indicative of a fear of commitment, though. No, instead we’re afraid of being honest and forthright in regards to our feelings for another.

Feelings are scary. I know. When it comes down to being honest and risking getting hurt or shutting up and living in blissful oblivion, nine times out of 10 we’ll choose the latter.

Entering into a full-fledged official relationship means one day officially breaking up and all that messy, emotional baggage that comes with. It means allowing ourselves to be vulnerable, letting someone see our weaknesses and scars and letting down all the defenses we built in light of past relationships.

To keep everything from going all Charlie Foxtrot, we’ll just clam up and accept the circumstances our other has imposed.

There’s nothing wrong with asking for more. More love, more affection, more attention, more romance. If you don’t, you’ll probably end up like me: confused, a little angsty and exhausted of chasing the fairy tale ending. And the issue is that your S.O. probably doesn’t know you want any of this. Hell, he or she might want it, too. But you two have probably been reinforcing the defenses on your castles for so long that you’ve been ignoring each other’s needs.

So instead of lying to each other – and yourselves – come forward and declare your feelings. It’s the only way you’ll derive peace of mind from the situation.

In case you were wondering, I stopped lying to Hunky Heartthrob that I hate formal titles and that I don’t want a relationship. It was scary and real, but it was real and that’s all that matters. I also finally mustered the courage to ask H.H. what I am to him.

“Be confident, you are my confidant,” he said.

I can’t confidently say I’m OK with that yet,  or the fact that he still considers himself single, but I’ve at least taken the first steps toward an honest whatever-we-are, whether it’s successful or not.

Calling it quits on chemistry of love

03 May 2010 Michelle A Provencher People You Should Know

In her final edition of Don’t Hate The Player, Michelle Provencher breaks her addiction to dating cold turkey.

Learning to focus on myself post-breakup

A student discusses leaving her relationship and entering the dating world amid the COVID-19 pandemic.