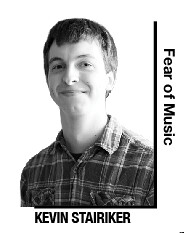 Columnist Kevin Stairiker concludes his “Fear of Music” series with a satirical take on how to be an unsuccessful musician.

At this very moment, it’s never been easier to be an unsuccessful musician, especially in Philadelphia.

As more and more people let loose their musical inhibitions, it seems that more people are finding themselves puzzled when their YouTube videos just don’t have as many views as, say, a Lil’ B rant, or Carlie Rae Jepson’s “Call Me Maybe.” It’s a simple equation, really: Not everyone can do those things.

I’ve been playing the guitar for four years now. Since then I’ve written songs and played them for indifferent crowds more times than I can remember.

It’s a fun time. I don’t carry with me any expectations of “being found” or writing “that one special song,” so it remains a hobby I can still enjoy without going absolutely insane every time I hear someone similar get noticed.

For those who would like to be similarly enlightened, read onward for my take on how to be an unsuccessful musician.

To do so, you should have barely a passing familiarity with an instrument or be a complete virtuoso. When you post songs online, make sure that they’re free, but also charge $1 per song. If you want to spread any news about your band, don’t promote it to anyone, and make sure to spread it around to every single persons’ Facebook timeline like a musical venereal disease.

You should practice for hours a day, but be prepared to never practice for a show. If you’re lucky enough to be in a band, be the closest friends in the world and have nothing in common and never talk about anything except your music.

Be militant about being on time for practices and then joke throughout the whole thing and never get anything done. Hate your singer, hate your bassist, hate your drummer. Replace them all. Repeat this process until you’ve found the people you dislike the least.

Be sure to let your music be influenced by what the current trends are, but make sure that it still has a timeless appeal. Collaborate with other people, but let them know politely that it’s a “one-person show, buddy.” Develop friendships with the musicians around you so that they may influence you in ways you never thought possible. Play only for your walls.

If you find yourself on this level, play shows with your dear friends and your hated rivals. Play with that sensitive bearded acoustic guy, but definitely make sure you have time to play with the Viking metal band down the street. Take every opportunity to be as self-deprecating as you can about your performance, during your performance.

Take every bit of criticism personally – don’t let it phase you. Let your Bandcamp play and download counts influence your mood for the rest of the day or week. Delete your Bandcamp and create a brand new profile on Myspace. Write about your woes on your band’s Xanga. Refuse to let anyone hear your music until it’s “perfect.”

Do virtual rewrites of other people’s songs until they sound different enough that you can get away with it. Rest your laurels on songs you wrote three years ago. Constantly play new songs that you haven’t memorized or haven’t prepared properly. Constantly write songs about depressing subjects, but make sure they have a catchy chorus.

Always take 10 minutes of your set to tune your guitar, only to give up and play impressively out of tune. Put songs in keys that you couldn’t possibly sing. Send unsolicited emails to blogs and labels with a cut and paste bio. Decide that you’ll wait until they find you.

If you take all of this advice, you’ll be well on your way to the best kind of hopeless obscurity the crowded 21st century musical landscape can buy. But don’t let it get you down – some people find happiness in just being able to make music.

Just having the components in the brain that allow it to clap rhythmically is a blessing. Being able to find like-minded people to play with is a blessing.

If you can have those things, do you really need to have random people tell you that they liked your songs? That’s for you to decide. As shown by the above, the life of the unsuccessful musician is one of brazen indecision.

Columnist Kevin Stairiker says Coldplay’s new single is anything but “wussy rock.” Contrary to popular belief, Coldplay is a pretty interesting band. It’s downright astounding that a band so reviled by large groups of people

Columnist Kevin Stairiker argues that while “Countdown” may not have topped Billboard charts, it possesess a universal appeal. During winter break I found myself driving a lot. Driving to Wawa, to friends’ houses, to nowhere