Remember when the All-American Girls Professional Baseball League debuted in 1943?

Regardless if you were born or not, you probably know little about it. Unless you’ve seen A League of Their Own.

But how much do you, in fact, know based on the flick? Former leaguer Doris Sams said the movie was “about 30 percent truth and 70 percent Hollywood.”

If you’re going to fabricate info, let’s just lie like God’s not watching.

Prime example: director Oliver Stone plans to release a movie by either the November election or January presidential inauguration entitled W., an account of the life and presidency of George W. Bush.

Political views aside, shouldn’t history take its course for a few years to see the effects of the Bush administration more clearly? There shouldn’t be any rush to create a movie based on actual events. Perhaps that’s why controversy ensued when Stone created World Trade Center less than five years after the terrorist attack.

But hey, who am I to stop the entire centrifugal motion of Hollywood? One man can’t elicit much change. Though, I elect to help the cause by giving Tinsel Town somewhat uninteresting storylines based on actual events to appease the wallets of executives. 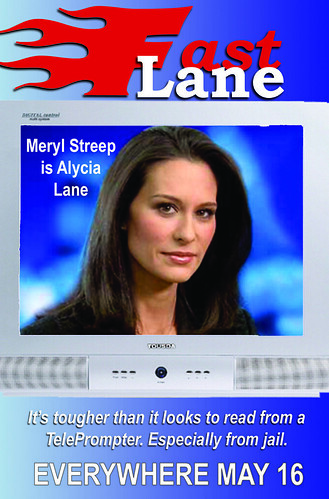 What do you get when you cross a successful television anchor, a New York City cop and a few choice curse words? Hollywood magic.

Based on the true story of Philadelphia anchor Alycia Lane, Fast Lane will give you a personal insight into the Latina bombshell the NYPD didn’t want you to see.

It was a cold night when Lane and her lowlife radio boyfriend decided to punch a female cop in the face. But it was a night that began the rest of her life.

At the ripe age of 34, the anchor decides to write her memoirs, something typically reserved for people who have actually achieved something in their lives. But the guilt becomes too much to bear as she watches repeat episodes of NYPD Blue on TNT every day.

Starring Meryl Streep as Lane (trust me, it works) and Larry Mendte as himself, Fast Lane will have you holding on for your life – as much as chronicling the tales of a fallen news anchor can, at least. 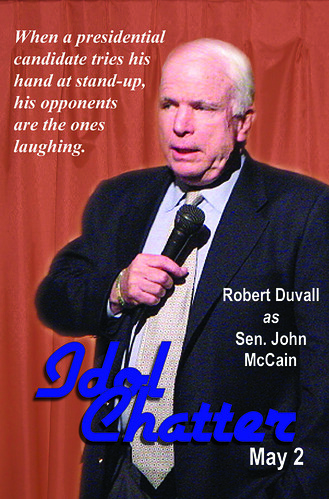 What happens when a presidential candidate attempts stand-up comedy in the midst of his campaign trail? Let’s just say the Titanic has a better shot of being resurrected.

Based on the true story of Sen. John McCain, Idol Chatter will leave you wishing the United States had a monarchy.
After a guest stint on The Late Show with David Letterman and a taped skit on American Idol, McCain decides he wants to give the strenuous comedy circuit a shot.

But his Republican tradition follows him as his audience approval rating continues to plummet. Distressed and confused, the senator must find a balance between his bruised funny bone (he actually hurt it in an incident involving a microphone stand and a sock puppet) and the quest for presidential anarchism. 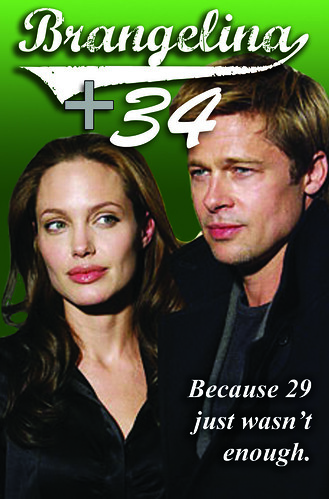 One is to blame for helping to begin the tradition of combining the names of celebrity couples into one cohesive moniker. The other likes kids. Lots and lots of kids.

So is the inspiration behind Brangelina Plus 34. Based on the true story of an unknown Hollywood power couple’s never-ending adoption and pregnancy cycle, Brangelina is sure to make even Catholics shudder.

It started on a trip to Africa, when Angelina decided to adopt a few kids. After Brad broke up with his Friend too good for him, he decided to travel with Angelina. Once they both decided they liked kids equally as much, they became the proud parents of 32.

But what’s an adoption tale without a surprise pregnancy ending and a twist consisting of exes? A pregnant Angelina (with twins!) must make the tough decision between a life of extreme domesticity and a life with Billy Bob Thornton. The decision may seem easy, but emotions run high.

But always remember – there’s no crying in parenthood!

The General Education Executive Committee announced last spring that the intellectual heritage program would be revamped for the first time in more than 25 years. The instructions from the GEEC mandated that the new curriculum

Summer pop music favorites fail to compete with past or impress

Every summer has an anthem. The typically overplayed, yet undoubtedly-catchy song can usually sum up those summertime memories. For example, Gwen Stefani had everyone shouting “Hollaback Girl” in 2005. Natasha Bedingfield told us to release

Imagine a nice spring day. The sun is shining, the birds are singing, you’re walking around campus looking for something else to do besides going to class or doing work, and then it pops into