With recent attacks against Temple students, These Hands Don’t Hurt was a welcomed charity at the Bell Tower. The brothers of Alpha Kappa Lambda hosted the event between spurts of rainy and windy weather last week. 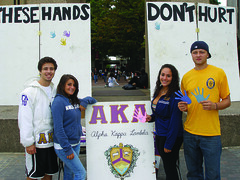 “These Hands Don’t Hurt is our national philanthropy for all of the Alpha Kappa Lambda chapters. We do this every semester at the Bell Tower,” AKL Philanthropy Chairman Steve Garfunkel, a sophomore sport and recreation management major explained. “We’ve been doing it ever since we’ve been here at Temple. It’s been a great success.”

“It’s something that binds all the chapters together, and it’s something to give back to the community,” said AKL President Coliln Emilius, a senior finance and real estate major.

“It helps a lot because a lot of people think that fraternity men don’t respect women,” Emilius added. “I think this is a great way to show that we really care, and we’re out here showing our support.”

Emilius said that the issue itself needs more attention.

“I just think that domestic violence as a whole [is something that] a lot of people don’t know about or just brush it under the rug,” he said. “We had [former] mayor John Street out here supporting yesterday, talking about the Michael Vick case and him going away to jail for hurting animals or doing things of that nature. But if we hurt our own people or we hurt women, we kind of push it under the rug, and you know it happens everyday right in your backyard. And it’s something we need to recognize.”

Garfunkel added that with the recent attacks on Temple students, people care a lot more about the issue as a whole lately, adding to the popularity of their event.

“The issue has definitely been getting a bit more popular, so I think that’s kind of helped us out. I’d say maybe even a semester ago, last spring, it wasn’t [as much of a] hot topic,” Garfunkel said.

The event featured a “Promise Wall” on the Bell Tower, displayed for everyone passing through the center of campus to see. The brothers of AKL asked students and faculty passing by to add their hand to the wall for a contribution of $1.

All proceeds from the event supported the local chapter of Women Organized Against Rape.

“We’re doing pretty well, it’s our second day out here, and I think so far we’ve raised about $200. Our goal is to get $500,” Garfunkel said last Wednesday.

Garfunkel said These Hands Don’t Hurt was their first charity event this semester, but more are on the way.

“We do have [a few service events planned], we’ll be doing some walks, a kidney walk, aids walk, and a diabetes walk. So those are all coming up in the next two months in October and November.”

A sophomore founded a Philadelphia chapter of Box of Balloons, a nonprofit that sends birthday party supplies to children living in poverty.

Alpha Kappa Lambda and HootaThon will host a fundraiser.

A fight for an education

Ryan Francis attempts to combat student debt with an online fundraiser this summer after having to support his family while his father was ill.