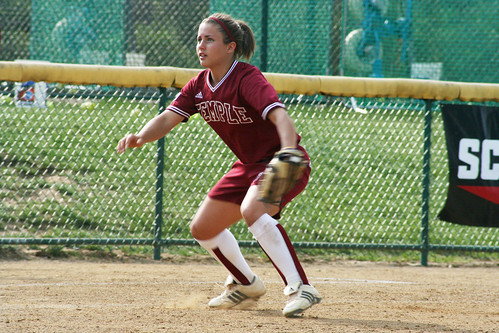 This time last year, the softball team was preparing to wrap up their regular season and face fifth-seeded Charlotte in the first round of the Atlantic Ten Conference Tournament.

The fourth-seeded Owls beat the 49ers, 8-0. They lost by that very score to Massachusetts in the second round, ending their chances at an A-10 title.

Before last season, the Owls had not seen postseason play since 2004.

Compared to last year, the Owls’ season will conclude a bit sooner.

Temple will most likely not make the six-team A-10 Tournament this season as the squad currently sits in last place (13-22, 3-15 A-10) out of 11 teams in the conference and is in the midst of a season-high 10-game losing streak with every defeat coming to league opponents.

Tomorrow, the Owls (13-22, 3-15 A-10) will host Villanova for a doubleheader at the Ambler Sports Complex and on Sunday, the squad will travel to Charlotte to wrap up the season with a pair of games against the 49ers.

“We had goals as a team, and when we didn’t succeed, that was our downfall,” junior third baseman Courtney Norene said. “We wanted to improve our offense. We didn’t have that offense behind us and that put pressure on the defense.”

During their losing streak, the Owls have been outscored, 61-10, and have been shut out six times.

Last weekend, the Owls dropped four home games. They lost a pair of games to both George Washington and Fordham.

Graduating seniors Teresa Bonavita, Brianna Dairy, Anna Rico and Natalie Wagner were honored before Saturday’s game against George Washington. The 2-0 loss was not what the team had hoped for.

“We we’re fighting really hard, especially against Fordham. This is the best our team has played against an A-10 competitor. We’re coming back to where we were at the beginning of the season,” Norene said.

The Owls went scoreless against George Washington. Junior pitcher Katie Burdeaux pitched seven shut-out innings, but the Colonials scored with the bases loaded at the top of the eighth inning. Wagner and Bonavita each had one hit in the game.

In the first game against Fordham, the Owls held an early 3-0 lead. Wagner and Rico each scored for the Owls, but that, along with two additional runs, was not enough to beat Fordham. The Rams slipped by Temple, 5-4, in game one.

The last time the Owls won a game was on April 12 with a 1-0 road win over Rhode Island. That victory capped a five-game winning streak, the longest of the season for the Owls.

Results from last week’s election have forced Temple Student Government to hold run-off elections on April 30 and May 1.

This is Chink’s Steaks, a restaurant with a reputation of great food and an infamously controversial name.

Behind Dionte Christmas, the Owls are once again A-10 champs. They advance to the NCAA Tournament to take on Arizona State.