Peter Jackson’s newest film is an emotionally charged endeavor that examines the soul after death.

The Lovely Bones is Oscar-winning director Peter Jackson’s favorite of his projects, if only because it is his most recently completed film. 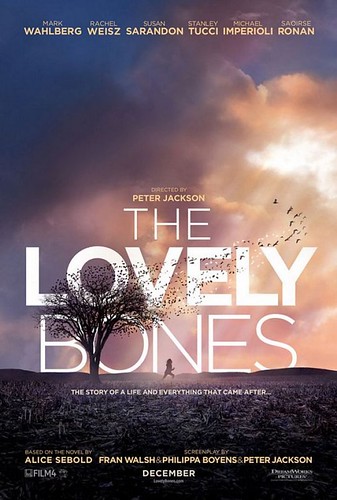 “That’s like asking a mother which of your six children is your favorite,” Jackson said in a conference call in which The Temple News took part. “Honestly, you enjoy making the one that you’re working on at the time the most because it’s such an intense experience, making a film, you know.”

The Lovely Bones, set for release Jan. 15, 2010, is about how the Salmon family, living in rural Pennsylvania in the early 1970s, deals with the rape and murder of their 14-year-old daughter, Susie, while she watches from heaven, unable to intervene in events on earth or to bring her father closer to discovering the identity of her killer. The Lovely Bones is an adaption of Alice Sebold’s novel of the same name published in 2002.

Jackson said the movies he makes are always those he wants to see as finished products, and this process begins with writing the screenplay. The Lovely Bones was his fourth project written with Philippa Boyens and his wife, Fran Walsh. This is the same award-winning team that wrote the Lord of the Rings trilogy and 2005’s King Kong.

The team chose to adapt The Lovely Bones because of its emotional power.

“The emotion of The Lovely Bones is really the purpose of making the movie,” Jackson said, “because we [himself, Walsh, and Boyens] read the book because it touches on all sorts of themes and things that you know we recognize in our own lives, and once you’re emotionally affected like that, you try to hang on to that feeling, or that emotion, and get that into the finished film.”

One of the challenges of making the movie, Jackson said, was deciding what parts of Sebold’s novel needed to remain in the film and which didn’t.

“Whereas an author of a book can write subplots, they can have secondary characters, and they can delve into other storylines that aren’t connected to the main story, it doesn’t work so well in a film. And so you tend to focus on just two or three main characters and really stick to the central plotline of a film,” Jackson said.

“One of the attractive things about The Lovely Bones is it’s an opportunity for me to make a movie, which says things about what happens to our soul after we die. And that’s obviously a question that we all wonder about,” Jackson said.

The cast of The Lovely Bones is largely responsible for bringing Jackson’s vision to the big screen.
Mark Wahlberg steps in as Jack Salmon, Susie’s father, and her mother, Abigail, is played by Rachel Weisz. Susan Sarandon plays Grandma Salmon. Stanley Tucci is nearly unrecognizable as creepy Mr. Harvey, the man responsible for Susie’s death. Michael Imperioli plays Len Fenerman, the cop who is assigned to Susie’s case.

Saoirse Ronan, who was nominated for an Oscar after her performance as Briony in Atonement, is Susie Salmon. Jackson appeared the most impressed with the young actress, saying he thinks of her as a young Cate Blanchett.

“[Saoirse] has the qualities that I think a great actor needs … She’s not acting – acting is never about pretending. It’s about making it real. And when she’s crying on screen, she’s really crying … She had to go there for us and not feel self-conscious … She’d try anything that I asked her to do. And she did it perfectly well every time,” Jackson said.

Working with these talented actors, although rewarding, is something that Jackson said unnerved him going into the project.

“All actors are different. It’s interesting, and one of my jobs as a director is to, very quickly, I’ve got to learn how to direct an actor,” Jackson said. “I don’t say the same thing to everybody because each actor requires a slightly different approach, depending on what their acting style is. I’ve got to fit in with their way of working and figure that out … And it’s quite daunting when you’ve never even met the people before, let alone worked with them.”

Although The Lovely Bones is about a young girl’s murder, it is not Jackson’s attempt to keep up with the horror craze in Hollywood.

“We don’t show the murder on screen. We didn’t want to do that, because we didn’t want that to be the defining moment of the film. We wanted it to be you know Susie’s murder is the catalyst that starts our story going. But it’s not a film about her murder. It’s a film about what happens after her murder,” Jackson said.

This had a lot to do with Jackson’s wish to make a movie his 13-year-old daughter could see and learn from.

“We really made the movie partly for our daughter,” he said. “We wanted to have some aspects of the movie be a lesson and a lesson that our daughter should look at because this stuff [rape and murder] does actually happen in real life, unfortunately.”

If the preview, already viral on YouTube, and Oscar buzz are any sign, Jackson’s The Lovely Bones just may be the audience’s favorite of his films and one we can all take something away from.