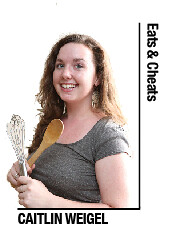 HipCityVeg did not originally appeal to me. The inclusion of the word “hip” is an automatic deterrent, but then, like a paranoid student staring down a standardized test, it occurred to me that maybe that’s what they want me to think.

Maybe they’re getting inside my brain and working some sick reverse psychology magic. By calling it hip, they’re ensuring that the real hipsters will stay away, thereby making it safe for the rest of us. But hipsters love to ruin good things – so maybe that will attract them. Or maybe it’s double reverse psychology, in which case the word “hip” is being used ironically.

Despite the sad amount of energy I put into forming an opinion on the name of the spot, my hunger inevitably lead me to patronize the establishment. The newly opened HipCityVeg, brought to the city by the gods of Green Eggs Café fame, occupies a small space on 18th Street half a block from Rittenhouse Square, and features a plant-based menu of salads and sandwiches.

The space itself is very tiny, so don’t count on finding a table, but in good weather, the aforementioned Rittenhouse Square is an awesome option for outdoor dining. I ordered the curried tofu wrap with sprouts, spinach, tomato, cilantro-white bean puree and cucumber-yogurt sauce, and a side of sweet potato fries with cilantro black-bean dip.

The art of eating in your lap is one I have yet to master. The set up went deceptively well – I spread out my meal, perched my dipping sauce on the arm of the bench and tipped my legs at the appropriate angle to make sure nothing would fall.

The actual act of eating the wrap complicated things, though. Without the cucumber sauce I might have made it through the meal unscathed. But the reality of the situation was that every time I took a bite, a steady stream of sauce dropped into my lap, or onto my chest, or just did a general splatter effect on my mid-section.

As I struggled with this most basic of skills, a man joined me on the bench, took out a water bottle, and began washing his feet. He clearly recognized that this was the bench for failure and next to me, his Dasani footbath wasn’t going to look that bad to the general public.

The wrap was delicious and filling, though tofu still weirds me out sometimes. Why would you ever describe a food as silky? That’s a fabric – that makes me think I’m eating a throw pillow from Tom Haverford’s house. The fries were on the softer side, which I dig, and were perfectly salty to balance out their natural sweetness. My favorite part though was the cilantro black-bean dipping sauce.

I sought to recreate it at home from memory. Using my superior detective skills I decided there was definitely cilantro in it, and probably black beans too. Knowing the veg-heads penchant for yogurt-based sauces, I tried adding that to the mix.

Chopping cilantro and scooping out a dollop of plain yogurt was easy. Smashing up black beans sans food processer was a little more difficult. I ended up dumping the beans into a galloon sized Ziploc with a small amount of their bean juice then hitting it with spoons, my palm and then books until it looked like the beans were smaller than they started.

I would like to state, for the record, that I have never claimed to be a culinary genius and that this technique was based a lot on the scrambled egg scene in the classic 1998 film “Billboard Dad,” starring Mary Kate and Ashley Olsen. And with that, I have reached my quota for citing MK&A this semester.

The result was not really the same thing. So I added a couple squirts of America’s favorite dressing. The ranch kicked it up a notch, but still didn’t totally do the trick. This has become a work in progress. I might have to recruit scientists on Craigslist to help me crack this case.

In the meantime, I highly recommend patronizing HipCityVeg. ‘Tis the season for picnicking in the park, and HipCityVeg’s fresh salads and sandwiches can definitely help you get in the spirit. If you’re anything like me, just remember to bring a bib large enough to cover your entire body. Or just cut some holes in the paper bag they give you and wear it on your head so no one will know your true identity as you splatter food all over yourself.