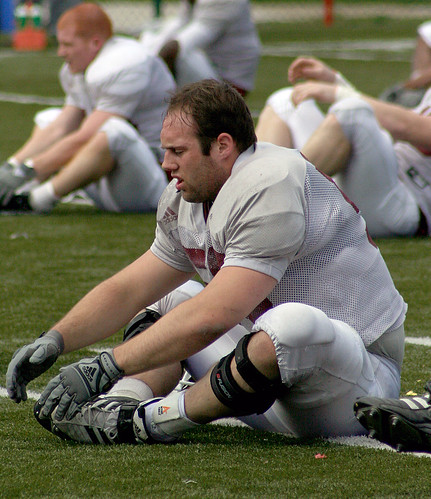 Only eleven days away from its annual Cherry and White game, several football players are aiming to secure an open spot on the team’s depth chart before the intrasquad contest kicks off.

The offensive line is no exception.

“I can tell you that nothing is set,” offensive line coach Andrew Dees said. “I think [we’ve] still got to find the right person to play in the fall. Spring is a great time for these kids. Other than [red-shirt junior co-captain Alex] Derenthal at center, everything is going to be a battle.”

Among those battling along the front line are 300-pound-plus sophomores Colin Madison and Lloyd Codada, who are both competing for the left tackle position. Last season, Madison started in four of the nine games he played in, while Codada started in two of the six games he participated in.

A little farther down the line, sophomore Chris Tremel is slotted to play right guard, while red-shirt senior Andre Douglas is penciled in at right tackle on the Owls latest depth chart, which was released April 4. Red-shirt freshman Jeff Passmore and junior Darius Morris are currently behind Tremel and Douglas on the two-deep depth chart.

But nothing is set in stone.

“There are still some pieces of the puzzle that have to fall into place,” said red-shirt senior Jabari Ferguson, who is listed as a starter over red-shirt junior Devin Tyler. “Once they do, we should be set.”

Derenthal, a team captain last year, is the only sure starter along the line at this point.

When Temple begins its season against Army in West Point, N.Y. on Friday, Aug. 29, the 6-foot-4, 294-pound Davie, Fla. native will be starting his 36th-consecutive game at center for the Owls. Derenthal was the team’s 2007 offensive MVP and is a candidate for the Rimington Trophy, an annual award presented to the most outstanding offensive center in the nation.

A lot of the Owls’ success this season will start upfront with the offensive line, Derenthal said. As the leader of that unit, Derenthal said he feels comfortable in his role.

“I don’t see it as pressure,” he said. “A little more responsibility, yes. But I wouldn’t take it any other way, but it is definitely not pressure.”

Ferguson, who played in 12 games, starting in four last season, agreed that the Owls’ success will depend on how well the line performs.

The Owls allowed the most sacks in the Mid-American Conference in 2007, letting opposing defenses get to the quarterback 45 times. The squad gave up five or more sacks in four games last season.

It took a while for the line to find its footing with the rush as the Owls only gained 38 yards on 50 carries in the first two games. From there, the Owls hit the century mark in rushing yardage in their next six games.

“I think we matured as last season went on,” Ferguson said. “It took us until about mid season to pick it up. We had a lot of freshmen playing which was good but now this year, we can start off strong from the start.”

A cool wind whispered along the field as sophomore Tim Boeni stood anxiously awaiting his turn in the long jump at Saturday’s Penn Invitational at Franklin Field. When his turn finally came, Boeni sprinted toward

Riders are on edge due to the recent string of random subway concourse attacks, but many Temple students who rely on SEPTA for transportation remain unfazed. “I’m not any more nervous than I was before,”