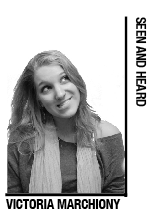 Columnist Victoria Marchiony reclaims the 14th as a day for loving all.

I love Valentine’s Day. Despite never having been in a relationship during this Hallmark holiday, I have consistently been blessed with single friends who are in the mood to pamper me.

Back in middle school, my best friend and I decided that at the ripe age of 12, we were tired of feeling bad for not having boyfriends – apparently the two years between this and the end of the“bring in SpongeBob cards for the whole class” era were really hard on us. Our solution was to take the day that seemed to be dedicated to making us feel alone, and instead, use it as an opportunity to be corny and loving, and enjoy ourselves as much as possible.

That year, we decorated each others’ lockers, exchanged sappy, sparkly cards and communicated almost exclusively through those conversation hearts that taste like medicine. Since then, my Valentine’s Days have been filled with every possible movie-worthy romantic gesture.

From steak dinners to being greeted with candy-grams in every class, I have had a pretty stellar run of V-Day experiences. However, although I have a soft spot for the holiday, I am very sensitive to the fact that other people do not.

For as much effort as I put in to make Valentine’s Day fun, I know that others put the same – or greater – energy into hating it vehemently. Valentine’s Day is touchy, especially for anyone who had a recent breakup, feels like they’ve been single for a little too long and even for those, myself included, who are mildly nauseated by public displays of affection.

It is for the benefit of these people that I give you, people in relationships, advice on how to maneuver your celebration so that you can both enjoy yourself and still have friends on Feb. 15.

The first danger zone that you need to be aware of is virtual – Facebook, Twitter or whatever blog you use. My general rule of thumb is that if you’re posting something directed at your sweetheart, it should be addressed to them specifically and not posted somewhere that will require 800 other people to see it as they innocently skim through their newsfeeds.

Examples of things that should probably not go into your status include: “Best 46 days of my life, luv u baby,” “2nite is gonna be so fun, *wink* HAPPY VDAY! <3,” or anything else that would make you roll your eyes if someone else posted it while you were single.

The other area of concern is physical in the how-far-is-too-far-in-public sense. Last week, I almost stepped on a used condom while walking near Paley Library. As I sidestepped it, my foot almost landed on another used condom.  I understand that Main Campus is in scenic North Philadelphia and is incredibly romantic and sexy, and that 50 degrees is pretty warm for February, but dear lord people, why?

First and foremost, there are much better places to fulfill the “outdoor fantasy,” if that’s what you’re going for. There’s also no way that it’s more convenient to do it outdoors than indoors at this time of year. Why anyone is making an extra effort to get it on near the Bell Tower is baffling to me.

Secondly, there are trashcans everywhere. Congratulations on using a condom, but please, don’t leave evidence of your super night for me to trip on. Also, latex is not biodegradable – if you want to bone in nature, do nature a favor and don’t leave souvenirs.

While I’m in no way implying that all couples are going to use Valentine’s Day as an excuse to have public sex, the previous example of pre-Valentine’s Day exhibitionism makes me nervous about what I’ll see when you have built-in “out” for getting carried away.

My only advice is to consider that even short of full-on exhibitionism there are behaviors that will probably make people uncomfortable. As far as I’m concerned, do what you want as long as it doesn’t require you to come up with a creative way to rearrange clothing.

To those of you in relationships, I hope that you use this completely made-up holiday as an opportunity to celebrate how into your partner you are in a manner that is private enough to not gross out everyone around you. To those of you flying solo, I hope you follow my lead and embrace the chance to celebrate all of the people who you love in your life, even if it’s purely platonic.

Victoria Marchiony can be reached at victoria.marchiony@temple.edu.

See or hear something interesting around campus? Let me know by emailing living@temple-news.com.

Performers will celebrate self-love during Tuesday’s event in the Student Center.