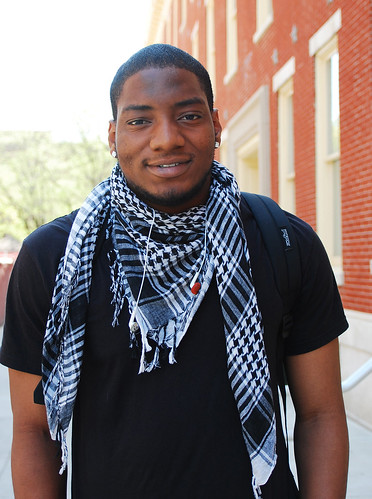 “Sheer striped scarf woven with some Lurex for a bit of sparkle. Finished with tonal fringe. Exclusive to Urban Outfitters. Imported. Dry clean.”

This description, found on the Urban Outfitters Web site, paints a picture of a $20 scarf – known as a keffiyeh – that is offensive to some Israeli and anti-war advocates. In Philly, it’s hard to go a day without seeing at least a dozen of them – casually worn by guys, girls and mannequins alike.
“Those goofy-looking hipster kids wear them,” Eric Bonnavent, an Art Institute sophomore, said.

“I wear them because I look totally radical in them, basically,” said Raheem Rademaker, a designer for Dweebclothing.com.

The fashion-forward kids strolling down Walnut Street and the Avenue of the Arts have absolutely no idea that some people in war-torn countries are wearing the exact same plaid, tasseled fringe scarves to support terrorism.

“It’s completely fashion forward,” said Torey Lehman, a fashion major at the Art Institute in Philadelphia. “It started in Hollywood and worked its way to our neck of the woods. I have a ton of colors and they keep me warm, even though it’s spring now.”

“Support of terrorism,” as the Herald Tribune called it, is just one of the handful of messages lying on the chests of people who wear these scarves, even though they think they’re only buying into a fashion trend.

Stores like Urban Outfitters and H&M sport these garbs in almost all of their window displays, making the scarf practical for nearly any outfit and any person to own.

“Why do people care about these scarves?” junior Monika Galecki said. “It’s just a piece of cloth. I don’t think anyone could be offended by something so minuscule.”

The keffiyeh has been a fashion accessory spotted from the runway in Paris to the necks of Arabic soldiers in Palestine. It is also part of the uniforms worn by neo-Nazi youth groups in Germany.

“Those scarves aren’t just for Palestinians, they are a part of wear for the Muslim culture as well. Since I have Muslim individuals in my family, I wear it as homage to them as well as a figure of my individual taste,” Sigourney Salley, a student at the Fashion Institute of Technology, said. “As an individual, if I choose to do my own research – it is my choice – their war, I believe, is not my war. My war is living day-to-day in New York City.”

Meanwhile, blogs like Jewschool.com, a popular blog for Jewish culture, have seen its message boards fill with outraged responses to the scarf.
Some feel as though this is a positive political statement that should be embraced more within the United States.

“I wear the keffiyeh as a statement of support for the movement to liberate Palestine from the Israeli occupation,” New York City resident Tigist Mogus said. “And there is nothing negative about that.”

The literal dictionary meaning of keffiyeh is “an Arab headdress for men, made from a diagonally-folded square of cloth.” Pictures of the late Palestinian leader Yasser Arafat can best illustrate the origins of this newborn Western trend.

Nicholas Ghesquière, the designer for the Balenciaga house, used Arafat as inspiration when he designed the “Balenciaga scarf,” which debuted on runways in August 2007. Within a couple of months, stores had knock-off versions of the scarf on their shelves.

“For many in the non-Arab world, the scarf may still conjure up images of anti-globalization protesters or armed rebels, but don’t be fooled,” Robb Young said in an article for the Herald Tribune. “This trend is just as fueled by globalization as any solidarity some who wear it may have with anti-globalization.”

Although fashion has temporarily claimed naïveté, the wearers’ wake-up call might occur sooner than they think. Representatives for Urban Outfitters have been close-mouthed about the issue, refusing to talk to the press without lawyer representation.

Giavanna Ippolito can be reached at giavanna.ippolito@temple.edu.

“Here in Philly, I don’t see anything for the kids,” she said. “Maybe in other neighborhoods, but here, it’s really sad. All you see is kids playing in the street.”

“We were looking for a gem and we found a bright diamond right in our own backyard.” – Former Temple Athletic Director Dave O’Brien after hiring Dawn Staley as Temple’s women’s basketball coach on April

Explore our Google Map of this week’s crimes.