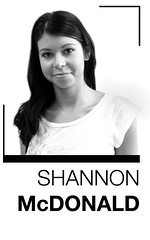 My four years at Temple will come to an abrupt end in nine days when I graduate. Much time is spent easing you in – campus tours, orientation, placement tests – but the adjustment to the real world is much more sudden. Technically, I’ve had four years to prepare for this, but I like to think I’m not the only one who feels surprised by the finality of it all.

I’ll adjust quickly enough to the bills, student loans and likely unemployment partly because I feel fulfilled by these last four years.

It took me four years to build up this reservoir of advice, and if I didn’t share it, I’d be hindering those who aren’t quite done here.

YES, COLLEGE IS EXPENSIVE.
I’ve never felt more financially taken advantage of than during college. It starts with the application fees, and I promise you, it won’t end until your loans are paid off.

People who know me can tell you I’ve spent countless hours complaining about giving Temple my money. I have Student Financial Services’ number memorized after spending the last four Septembers tracking down my loan refund. People got earfuls when I paid a technology fee for my summer internship and fees for graduation and the commencement cap and gown.

You’ll complain, too, but universities are businesses. We’re their best customers. Remind yourself of that next time you buy a $50 Temple sweatshirt or a $4 fruit cup from the food court.

SCHEDULE SOME FREE TIME.
Leisure time is important, but so are those precious few minutes between classes. I’ve tried several roster variations over the years, and there are definitely some that work better than others. I was lucky enough to have Fridays off early in my sophomore year, and I’ve never looked back – sometimes to my detriment.

Last spring, I took five consecutive classes on Tuesdays and Thursdays, leaving the other days open for work, internships and fun. I was miserable two days a week, running from the 11th floor of Anderson to Ritter Hall, eating squished sandwiches I packed the night before and lugging my books around for eight hours. Sometimes, a 50-minute break matters more than a Friday off.

WE ALL KNOW OWLNET SUCKS, SO MOVE ON.
Quite pathetically, one of the best feelings of my life is knowing I never have to register for classes on OWLnet again. I relish never having to sit at my computer at 11:58 p.m. with a knot in my stomach, hoping I can crawl into bed before 2 a.m. with a completed roster. For now, OWLnet is a cruel reality that you just have to deal with. Try to do it gracefully.

TEMPLE IS IN PHILADELPHIA. EXPLORE.
Temple students have no excuse for being bored. We’re in the middle of a city of 1.5 million, with way too many neighborhoods to count. Get over your fears and assumptions about Philadelphia, and see it for yourself. Skip what you saw on the third grade field trip, and get a real feel for the place. If you graduate without getting to know the city, you’re missing out.

TAKE ADVANTAGE OF THE FREE STUFF.
Temple offers tons of free stuff. For starters, the annual barbecue for the graduating class. I spent Friday afternoon drinking free beer and eating free food while hanging out with the Class of 2009. Not too shabby.

But there’s plenty to enjoy now. Try Free Food and Fun Fridays at the Student Center, which is exactly what it sounds like. And, thanks to the Tyler School of Art, we have a built-in art gallery on campus.

Keep these things in mind, and find new things to pass along to those who come after you.

Shannon McDonald can be reached at shannon.mcdonald@temple.edu.

Accommodating college students on the spectrum at Temple University

‘Kid gloves’ must come off for professors, students alike

The relaxed attitude of some classrooms and students hinders learning.