The African nation of Liberia was deeply entrenched in the country’s first civil war in 1992, and the capital city of Monrovia had been overthrown and lay in ruins. Out of this devastation rose a new hope, however, and a way to escape the agony. 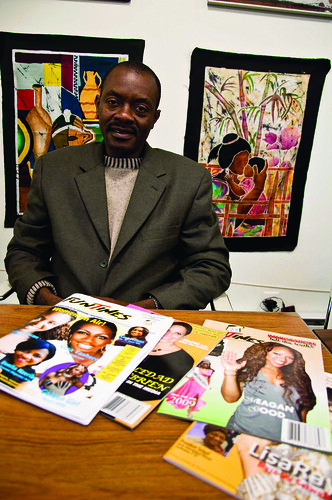 This hope came in the form of a light-hearted Philadelphia publication, Funtimes. The magazine promotes laughter as the best way to cure people’s misfortunes, specifically African immigrants in West Philadelphia. Funtimes founder and publisher Eric John Nzeribe is an entrepreneur and distinguished leader in the African community.

“In the 1990s, we had war in Monrovia,” Nzeribe said. “There was civil strife and fighting. So we had a lot of hardship, and we experienced a lot of troubles. Funtimes was formed to give the lighter side of life to my people and to show them that there was light at the end of the tunnel.”

Nzeribe continues this mission through the bimonthly publication of Funtimes. The magazine caters to African immigrants, as well as those affected by the African Diaspora. According to the U.S. government census, there are more than 60,000 African immigrants in the greater Philadelphia area. Many of these people are refugees who have fled their nations because of civil war, corruption, poverty and political persecution.

Funtimes’ fundamental purpose is to serve this vast, but often overlooked, community. Nzeribe said Funtimes provides a channel for, “the African, the Diaspora or anyone else who has something to say to the world.”

The magazine has been making people smile for almost 18 years with its good-humored content that comes in the form of witty jokes, amusing stories and even comic strips. Funtimes often includes satirical cartoons of current political events and figures. The look of the publication itself is vibrant. Each magazine is energetic in appearance, often pulsating with an array of bright colors, and includes lively cover art that features a person of interest to the African community each issue. The fonts and headlines are eye-catching but typically easy to read. Funtimes features an abundance of festive photos of the African community; colorful borders and backgrounds highlight these pictures giving them a pleasing veneer.

While the magazine is mostly uplifting in format and content, it does not fail to recognize the continuing hardships of the people who initially inspired it. Funtimes incorporates heartfelt depictions of the people currently suffering in Liberia, Haiti and other struggling nations.

Funtimes has been operating in Philadelphia for almost two years now and manages offices in Monrovia and London; however, it has remained community-oriented and sponsors local events, such as the Miss Black America Pageant and the Multi-Cultural Affairs Congress.

Funtimes often publishes letters from its readers giving their thoughts on the magazine.

“Funtimes is a very good idea,” Henretta T. Johnson of Philadelphia wrote. “It encourages young people like myself to do good things and love themselves. Therefore, they can love and appreciate the people around them and enjoy themselves.”

Jean Benishay of Roosevelt Boulevard, however, was more critical of the magazine when she wrote: “Funtimes should contain more information on African and Caribbean communities. For instance, how can people access healthcare?”

Letters such as these allow for the community’s input into the publication.

Despite Benishay’s criticism, Funtimes is not all fun and games, as it also contains an array of informational content.

“We are a conduit of information, education and entertainment to the African community and the Diaspora,” Nzeribe said. This information includes advice on immigration issues, job searches and social networking for the African immigrant community in Philadelphia and abroad. With the economic recession in full swing, many immigrants are in need of a boost.

“It seems like a very good fit to add something like Funtimes,” said Nzeribe, who writes a one-page editorial that updates the Funtimes community on recent events each issue. Professional journalists and community members report the majority of the content. These contributors range from practicing doctors to enthusiastic reverends.

The magazine’s health awareness section examines health issues such as sickle cell disease, HIV/AIDS and other sexually transmitted diseases. It also includes recipes for healthy and delicious meals such as “Ghanaian Jollof Rice,” African chicken with rice. The recurring “Dear Aunty Mamie” segment encourages readers seeking help with their personal problems to write in and receive advice in return.

Funtimes also covers critical social issues like religion, poverty and politics. The magazine provided extensive coverage of the tragedy in Haiti as well as the election of President Obama. Funtimes analyzes President Obama’s strategies as well as other government policies that affect the immigrant community. Poverty continues to be a difficult reality for the community, but Funtimes often portrays this issue in an optimistic and encouraging manner. In its coverage of religious issues, Funtimes remains open-minded and acknowledges all forms of Christianity, including the Baptist, Catholic and Protestant faiths, and regularly refers to the Muslim faith.

Funtimes depends purely on advertising to generate profit and continue to grow. Most of this advertising comes from local businesses that support the African community. These businesses include trusted grocery stores, law offices dedicated to serving the immigrant community, African fashion retailers and multi-cultural dance clubs. The support of these advertisers allows Funtimes to form a stronger connection to its audience as well as build a tight knit community. Funtimes periodically names the best African businesses in the area. These awards include the “Best African Restaurant” and the “Best African Grocery Store.”

In addition to the magazine, Funtimes runs its own website at FuntimesMagazine.us. The website serves as an extension of the magazine with the same vibrant, upbeat character. It includes photo galleries and video from sponsored events, exclusive blogs and an online magazine archive.

“We just want people to visit our website and send us information,” Nzeribe said. “They are welcome to be a part of Funtimes and a part of the community.”

The story of Nzeribe’s establishment of a human-interest magazine in a war-torn city is nothing short of incredible. Funtimes is now approaching its goal of 10,000 international subscribers. With the recent opening of a new office on 52nd Street, the light at the end of the tunnel just keeps getting brighter for Funtimes.

Jeffrey Janiczek can be reached at jeffreyjaniczek@temple.edu.

Some blame the flash mobs solely on boredom, but there’s more to the story.