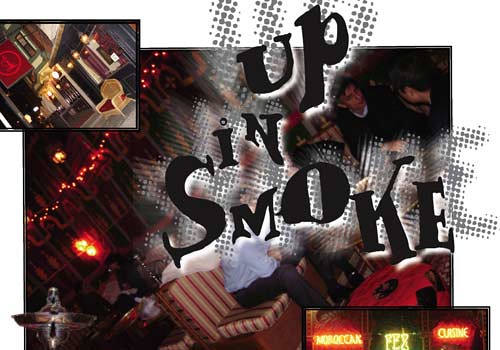 Dim lights, exotic music and a fruitful aroma. If this doesn’t peak your interest, perhaps Mediterranean food that delights the palate and puts a warm sensation in your stomach will. A Mediterranean commonplace, hookah lounges in Philadelphia are a great place to enjoy drinks, food and flavored tobacco with family, friends or coworkers.

While hookah is no healthier for you than lighting up a cigarette, it does offer a sweet-smelling alternative. As Shouk owner Georgia Vass said, “The hookah is not offensive to anyone. It’s not like a cigarette – it smells good. It’s like incense.”

I can’t help but agree. As soon as I walked into Shouk, the smell of mango and strawberry hookah filled my nose. Other aspects of smoking hookah that one could consider beneficial are the lack of additives and paper, as well as the fact that the water in the hookah creates a smoother smoke.

The two lounges that I had the chance to visit are both located in the eccentric South Street and SoSo – South of South – areas of Philadelphia. Fez and Shouk are only separated by a couple of blocks, but create entirely different atmospheres.

Located at 622 S. Sixth St., the lounge opened in the beginning of March 2006. Shouk acquired its name through the Hebrew language – a “shouk” is an “open-air market.” There are many hookah lounges named after the Arabic form of the word, “suk,” so it was a reasonable choice for Vass.

Walking into the restaurant, the ambience was welcoming and relaxed. The lights were dimmed and a mix of world music played in the background. Shouk is set up with low tables and plush, deep red seats. A bar is in the back lounge and there is seating upstairs, which can be reserved for private parties of up to 30 people. In the past, Shouk has hosted birthday and bachelorette parties in the private room. While still maintaining the Mediterranean theme, Shouk offered a more modern atmosphere.

“We wanted to make it a little more accessible. We wanted to have Middle Eastern themes without it taking over the whole restaurant,” Vass said.

Shouk is frequented by people of all ages, but as it gets later, younger crowds between the ages of 20 and 30 are more commonly seen at the lounge.

Although I came without a reservation on a Saturday night, the staff accommodated my group with no problem. We ordered one mango hookah for the five of us, which cost $18. Along with the hookah, we ordered the sweet and spicy chicken wings and the Mediterranean sampler, both reasonably priced. Brendan Vise, the head chef at Shouk, did an excellent job of providing tasty food in a timely manner.
I was truly relaxed in the atmosphere Shouk created and was extremely impressed with the DJ that was mixing that night. DJ Fenicx frequently spins at Shouk, but also works at other places throughout Philly. He definitely added to the hip, modern vibe of the lounge.

Normally, a night out to Shouk will take about two hours.

“You can do everything here – eat, drink, smoke,” Vass said.

The hookah itself can take about 45 minutes to smoke, give or take a couple of minutes depending on the number of smokers. Add in food and drinks and the fact that, once you’re sitting and comfortable, it takes considerable effort to want to leave – you could be there until closing.

A few blocks down at 620 S. Second St., an authentic Moroccan restaurant and hookah lounge offers transportation to another country. When it first opened in October 1991, Fez was strictly a dining restaurant, but after requests by many Mediterranean people for hookah, the family-owned restaurant happily obliged, owner Tony Sawan said. It was one of the first hookah lounges to open in the Philadelphia area, and people of all ages frequent it.

Fez is set up to make guests feel as though they are inside a Moroccan tent. With colorful fabric covering the walls and ceiling and Moroccan lanterns glowing everywhere, Fez’s atmosphere and décor allow people to experience Moroccan culture first-hand.

“I want [customers] to feel at home. When people come in, they forget they are in Philadelphia,” Sawan said.

My date and I were situated in a back corner of the restaurant at a large, circular table with heavily patterned seating. The dim lighting made it hard to see the menu, but we managed.

While Fez offers many choices, including six, seven and eight course meals, my date and I agreed on à la carte for the evening. On weekends, only the course meals are served. These courses allow you to truly delve into the Moroccan experience – you wash your hands in a small bowl and then eat with them.
“People enjoy it so much, especially with the meal. It takes a couple hours and the hookah takes time. They’re good together,” Sawan said.

Although our entrees did not come out at the same time (in fact, they arrived almost 15 minutes apart) and we waited much longer than I expected to receive the hookah, my experience at Fez was enjoyable. The chicken shish kabobs that I ordered were tasty, and the apple hookah relaxed and calmed the mind. The entrees were reasonable, ranging in price from $10 to $20, and the hookah cost $20. Fez also offers a full bar.

To add a bit of entertainment, Fez offers belly dancers upon request on the weekends and for large parties. It also has a private room that can seat about 100 people, Sawan said. To reserve this room free of charge, your party must include more than 20 people. Occasionally, Fez has DJs as well.

I was surprised by the popularity of both Fez and Shouk, since I’d been to others outside of the city that had barely any customers. Shouk owner Vass suggested smoking hookah once a week, and I concur.

Moderation is the key. One shouldn’t be fooled in believing that hookah is really that much better for you than a cigarette, but it definitely is a nice alternative. Not only that, hookah lounges offer a relaxed environment for unwinding.

Amanda Fries can be reached at amanda.fries@temple.edu.