The surprise box-office hit Paranormal Activity has been sweeping the nation with its low-budget effects and high-impact scare tactics. 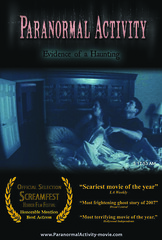 The first feature film from director Oren Peli, it stars Katie Featherston and Micah Sloat as a couple that decides to film the strange occurrences that have been happening in their house. But as the filming continues, the disturbances become worse, especially at night.

While this may not sound like the most epic plotline for a horror film, many have deemed Paranormal Activity the scariest movie of the decade. This may be evident from the many viewers who have left theaters before the film is over, too disturbed to go on watching. However, most viewers seem to agree that Paranormal Activity is a must-see this year, especially with Halloween just around the corner.

“It was the scariest movie I’ve seen in a theater ever,” said sophomore art history major Jessica Abramson. “It was great.”

Paranormal Activity is playing in select locations throughout Philadelphia, one of which is the Bridge Cinema, located at 220 S. 40th St. in University City. The hike is worth it, but students should be wary of when they decide to go. Packed theaters during the weekends often lead to missing crucial bits of the movie.

Danny Jacobs, a sophomore environmental science major, said while he thought the movie had “good moments,” he “would’ve liked it more” if he saw it at a less noisy show time.

So when you’re making your Halloween plans or need something to do, definitely give Paranormal Activity a shot. Just make sure you find a quiet theater and that you don’t need a lot of sleep for the next day – because you probably won’t be getting any.

Kirsten Stamn can be reached at kirsten.stamn@temple.edu.

The recent release of Jennifer’s Body may be an example of an emerging trend of women producing horror films, a typically male-dominated genre.