After earning Big 5 Rookie of the Year honors last season, Kristen McCarthy leads the Owls with 13.2 points per game this year.

At first glance, sophomore forward Kristen McCarthy’s transition to collegiate basketball was a seamless one. After all, the California native started 20 games her freshman year en route to being named the Philadelphia Big 5 Rookie of the Year. But, like any college student moving across the country, McCarthy had her fair share of ups and downs. 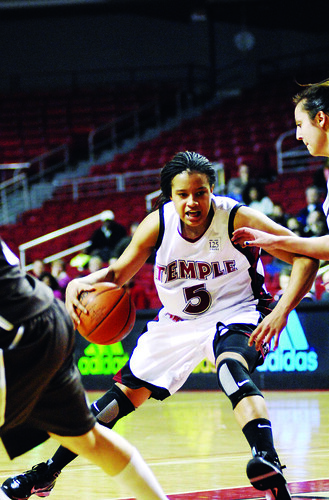 “Kristen was an outstanding leader,” Bishop Amat Coach Richard Wiard said. “She was an underclassman on teams that had five future Division-I players on the roster. After her teammates graduated, she became the unquestioned leader of our team, not just because of her talent, but because her teammates respected her work ethic and ability to lead.”

“All of the Pac-10 recruited me except for Stanford. I had some other East Coast schools, but I was mostly looking at the Pac-10, Rutgers, [Temple] and Florida,” McCarthy said. “I had signed here with intentions that [Staley] was going to coach me, and I was going to play for her. I was excited.”

When Staley decided to leave the Owls to become the coach at South Carolina, McCarthy started to doubt her decision to leave home. Nonetheless, she enrolled in summer classes at Temple. Once she arrived and met with new Temple coach Tonya Cardoza, McCarthy’s initial reaction was to transfer, Cardoza said.

“The first day that I met her was during summer school,” Cardoza said. “The next day she came in and told me she wanted to transfer. I just didn’t think that was something she really wanted. I just wanted her to give it a chance.”

“I made it tough on coach Cardoza to convince me to stay,” McCarthy added. “I was still upset about the coach Staley situation. I told coach Cardoza, ‘I know you’re not coach Staley, obviously, but I’m going to work hard for you.’”

Once McCarthy decided to give Temple a chance, she said she realized how lucky she was.

“Once I knew I was going to be staying here, I made the best of the situation,” McCarthy said. “I love basketball, no matter where I play, I just want to play. I began to get happier as the season went on, and I realized how blessed I was that I ended up staying here. I got to know the coaches, and I realized this really was the best fit for me.”

After she put her initial doubts behind her, McCarthy focused her attention on the upcoming season. She saw playing time immediately but did not earn a permanent spot in the starting lineup until Atlantic Ten Conference play began. When the season ended with a 70-57 loss to Florida, McCarthy had averages of 8.6 points, 4.3 rebounds and 1.6 steals per game.

“I realized that everybody has to do what’s best for them,” McCarthy said. “I was happy for Lindsay wherever she went. Fortunately, she didn’t go too far, so I get to talk to her all the time.”

Despite another obstacle, McCarthy returned home to California, set on improving her game. Upon returning to Philadelphia, McCarthy was selected as a co-captain by her teammates, along with senior guard LaKeisha Eaddy.

A starter in every game this season, McCarthy has averaged 13.2 points and 5.7 rebounds per game while leading the Owls to a 17-6 record. But McCarthy’s true value to the program comes between games, her coaches have said.

“You want to have kids like Kristen on your team,” Cardoza said. “You want to coach those types of kids. She’s going to give it her all. She’s always in a good mood. Since I’ve been here, she’s never come to practice with a bad attitude.”

As an assistant coach at the legendary University of Connecticut program, Cardoza helped develop 2008 Olympic gold medalists Sue Bird and Diana Taurasi. While stopping short of designating her star as a future Olympian, Cardoza did admit that McCarthy shares a similar attribute with Bird and Taurasi – an amazing work ethic.

“The thing is, Kristen wants to be really good,” Cardoza said. “If I told her that we weren’t practicing for five days, she would want to come to the gym the next five days to get individual workouts. Those types of kids are hard to find. The sky’s the limit for her.”

“I think Kristen will play professionally either overseas or in the WNBA,” Wiard said. “She has the talent, work ethic and desire to do it.”

Pattern repeats after elimination in 1st round

The 2008-2009 season brought the good and the bad for Temple basketball, as early season struggles paved the way for a men’s A-10 Championship and two NCAA Tournament berths in March.

Still undefeated in Atlantic Ten Conference play, the Temple women’s basketball team will take on two more conference opponents this week as it looks to keep its 12-game winning streak alive. Coming off a 72-63