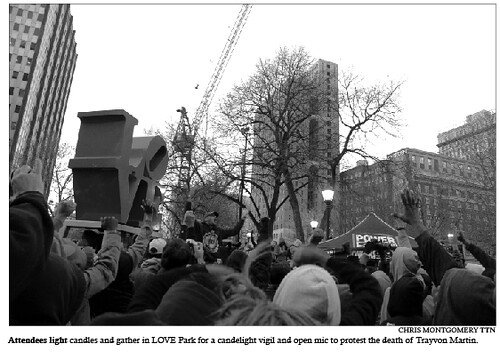 Steve Hodge, a West Philadelphia resident, said the killing of Trayvon Martin was motivated by abuse of authority.

On Feb. 26, the killing of 17-year-old Trayvon Martin at the hands of George Zimmerman, 28, a self-appointed neighborhood watch captain, caught nationwide attention. Many alleged that the actions of Zimmerman were an act of racism.

To date Zimmerman has not been charged with any crime, and as a result, supporters have formed protests and petitions to call for justice.

Steve Hodge, a resident of Philadelphia for more than 25 years, has mixed opinions about the issue. He acknowledges that racism may have played a role in it, but speculates that the issue may be more complex.

“At first I was angry because the reports were that this was a guy that was defenseless,” Hodge said. “Later I think that there’s more to the story.”

“Zimmerman probably needed to be arrested, but I think that if there was evidence that he had done something as outlandish as cold blooded murder of that boy, I believe he would have been arrested then.”

Hodge said sees the issue not solely based on an act of racism, but misplaced authority.

“We know that racism exists,” Hodge said. “I think that Zimmerman pushed some authority that he didn’t have. And [Martin] didn’t respond the way Zimmerman wanted him to and they got into a confrontation.”

While there is a lot of speculation regarding what exactly happened the day of Martin’s death, many agree that the local police of Sanford, Fla. did not handle the investigation properly. This prompted the U.S. Justice Department’s investigation into Martin’s murder on March 19. Nonetheless, Martin was found in violation of the Neighborhood Watch manual, which states, “It should be emphasized to members that they do not possess police powers, and they shall not carry weapons or pursue vehicles.”

“They are supposed to report what they see and if they do anything beyond that they should be held liable and accountable for it,” he added.

Hodge said that the attention should be shifted to other issues plaguing youth as well.

“I believe [the media] is manipulating the people and making it a much larger issue than it is because among our youth they’re a lot more accepting of things that in my youth I didn’t accept,” Hodge said.

Columnist Brandon Baker discusses the bigoted mindset surrounding the Trayvon Martin case. I need to stop wearing hoodies. Famous Fox News talk show host, and quite possibly the only thing (once) attractive about the conservative news