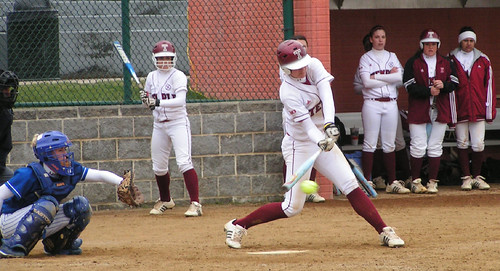 With a perfectly timed stroke and the ringing of aluminum through the air, junior Courtney Norene did something no Temple softball player has ever done.

On Friday, in Kingston, R.I., Norene cranked out her record-breaking 22nd career home run, passing Adrienne Repsher’s mark of 21, to become the Owls all-time home run leader. The indelible blast also vaulted the Owls to a 1-0 win over the Rams.

“I didn’t really set up to achieve [the record], it just kind of happened,” said Norene, who leads the team and the Atlantic Ten Conference with 10 home runs this season. “But it all happened so fast, I don’t know, I haven’t really had it all set in. I’m really happy that it happened on a win. I’m just excited to do more after this.”

While it took only three seasons for Norene to break Repsher’s record, the previous long ball queen, who played for Temple from 2004-2007, had only praise for her successor.

“If someone were to break my records, I would want it to be someone like Courtney,” Repsher said in an e-mail. “When I had that memorable season last year, I broke some of Lynsey Grace’s records, and she told me that records are meant to be broken.  I agree with that statement, and couldn’t be happier for Courtney’s continued success on and off the field.”

The two sluggers have remained in contact even after Repsher’s tenure ended.

In support of her former teammate, Repsher attended recent games at Skip Wilson Field, as well as making a weekend trip to Massachusetts for the Owls doubleheader.

“I didn’t get a chance to talk with her, but she’s been a really good friend of mine and I’ve kept in touch with her,” Norene said, “so I know I’ll talk to her sometime this week.”

Entering the season, Norene ranked in a distant tie for second on the career home run list with 12. But the chase quickly began after she belted two homers in her first four games. Currently, she boasts a .314 batting average and leads the team in RBIs with 20. She also leads the A-10 with a .786 slugging percentage.

With 12 games remaining, and a season’s worth of swings still at her disposal, Norene anticipates many more fence clearing bombs to come.

“I hope to get at least 10 more,” Norene said. “If I can hit 10 this season — this season obviously isn’t over with so I don’t know what will happen — but I think 10 is definitely at least in my range. It’s really cool to just be a junior and have accomplished this goal.”

Norene’s record-in-progress continues on Wednesday in a doubleheader against Saint Joseph’s. But with the pressure of reaching the 21-homer plateau behind her, Norene can now narrow her focus towards getting the Owls a few more wins this season.

Anthony Stipa can be reached at  anthony.stipa@temple.edu.

Editor: [In response to [“Joe Frazier’s Gym closes for renovations,” Christopher Wink, April 3, 2008] Speaking as boxer Marianne Marston, I can personally confirm I am not returning to London, whatever Mr. Leslie Wolff says

Football Bone marrow drive In conjunction with the Fox Chase and Temple Cancer Centers, the Owls will conduct their first bone marrow drive Wednesday in room 200 of the Howard Gittis Student Center from noon

‘Scootie’ seeks to be in the mix next year

As the Temple men’s basketball team made its surprising run to the NCAA Tournament last month, thoughts raced through Andrew “Scootie” Randall’s head. “They played pretty good and they could’ve made it further in the