The Youth Leadership Group at the Lighthouse and the city of Philadelphia Let’s Read! Let’s Move! steering committee hosted a children’s festival at Fairhill Square Park in partnership with other North Philadelphia organizations on Aug. 10.

Organizers of the event hoped to draw attention to the many positive resources available to the community through social gatherings at the park. They ultimately hope to discourage the prevalence of crime and drug use in the area.

Children and families were brought together with music and light refreshments. Face painting, kick ball and water balloon tosses were among the numerous activities open to children. 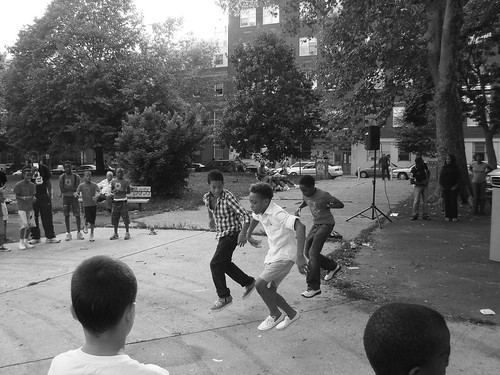 “We want them to know that this is their home. They should be happy with their home, they should feel safe,” said Tiffany Perez, a volunteer for the Lighthouse.

The Lighthouse serves North Philadelphia and Kensington residents in an effort to “provide educational, recreational and economic improvement programs to families and individuals to affect positive change and improve the quality of their lives,” according to Serve Philadelphia, a website dedicated to volunteer efforts.

Ruturaj Rana, a junior international business and management and information systems major volunteers for Lighthouse and can recall finding needles on the ground during several park clean-ups.

He said he hopes that continued efforts to keep the park clean will prompt those who use it to respect the area.

“I think that sometimes people look at a neighborhood and what is negative is easy to see on the surface, but if you dig below the surface this neighborhood has so many great things happening,” said Catie Wolfgang, Philadelphia’s first chief service officer and Temple alumna.

In the upcoming weeks, organizers at Fairhill Square Park will continue their initiative and are planning to have a book bag drive Sept. 10, hosted by the Men in Motion in the Community, as a part of the Building Bridges back to school event.

It is vital that those in the community become involved to work toward a goal of prosperity in this community. Events like this are needed especially in light of the recent flash mob attacks.

Wolfgang said that, “providing the best grounds for young people to make the right choices” is also the responsibility of the community, which is why she stresses the importance of collaboration amoung everyone involved.

Although change isn’t going to happen overnight, this is certainly a stepping stone to creating a more constructive environment that children and families can value.

“People do what they want to do, so if you tap into the positive things people want to do then you have this powerful force,” Wolfgang said. “They’ll come together to do positive stuff.”

Pending Blue Horizon sale is only for looks

If you don’t involve yourself in Philadelphia boxing, then you’ll never find a boxer you’ve heard of fighting at the 1,200-seat Blue Horizon. The money isn’t there. Instead, you’ll find two fighters respectfully trying to

A law student and an alumnus are seeking seats in the Pennsylvania House of Representatives.