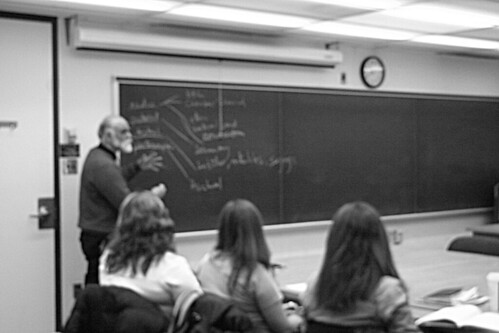 Dr. Jayasinhji “Bapa” Jhala is an associate professor of visual anthropology with some self-declared unconventional teaching practices. Jhala says it’s his colleagues’ straight-and-narrow applications, though, that allow him to encourage students to “climb a hill of unfamiliarity” by engaging in “speculation, mad flights of imagination, crazy inventive behavior [and] outside-the-box actions.” In perhaps one of the most unorthodox interviews The Temple News has ever seen, Jhala sat down for an in-class interview, where he talked about Indic philosophy, the topography of heaven and a concept he may have hatched – the ethnosurreal.

The Temple News: How long have you taught at Temple?
Jayasinhji Jhala: Literally, I think it was ’91. That’s a nice, interesting straightforward question. (Laughs.) But I think how I teach now and how I taught then is very different, and what I’ve come to find important now and what I found important then is different, too. So, if you use the notion that I’m like an amoeba or chameleon, changing over time, you’ll have a different answer about how long I’ve been teaching.

TTN: What was the first visual project you personally completed?
JJ: The first movie I ever made was in New York. It was this Escher painting. It was that famous one about the turtle. And so we, just, made the turtle walk.

TTN: You’ve been known to take on independent projects with your students. How often does this happen, and how does this engage students in the learning process?
JJ: Now, this is my universal qualm. Some people I can seduce and others I can’t. The ones I do seduce, work with me. And those who have better judgment, [do not]. (Laughs.) Right now, we’ve got four or five projects happening. And this film-making business, it’s really astonishing. I’m kind of the old goat in front. Sometimes, [the students’] ideas are superior to mine. Most often, they’re superior to mine because they see a way out of the problems [that can be encountered in filmmaking]. You guys, at your age, are much sharper than I am.

TTN: Currently, you’re working on a student-project involving the projection of images onto buildings from inside a moving vehicle. Can you tell us more about that?
JJ: It’s an experiment. I don’t know if it can even work. But Philadelphia is very famous for [the Mural Arts Program] and graffiti. And so, we thought, “Is there a way to bond these but with other kinds of images, which they’re actually there, and [then,] they’re gone?” And at one point, I thought maybe, just show a film about a Yadamari fishing scene, a 10-minute film, in one block, and [then] let’s move on. But we haven’t been able to [accomplish this] yet. Another student here had a brilliant idea. He found a pram, a baby carriage, and he said, “We put the projector in the pram, and then we can easily move it.” Because if you are cruising the streets in the car, it’d be kind of difficult to [maneuver]. The power source is [also] the issue, and also, getaway is not easy in a pram. (Laughs.)

TTN: Is this “getaway” you speak of something you often encounter, where you’re working on a project in public and find yourself running from some sort of law enforcement?
JJ: Well, that’s an interesting question. Maybe it’s because I’m not a U.S. citizen, I’m like a guest worker here, so most of my work has not been what I would consider cutting-edge social-issue stuff. I admire a lot of that work, but it’s not that I don’t think I can do it, or not that I don’t feel strongly about abortion issues or race issues and other things like that, I just feel that, as I’m not a citizen, is it my right? So, by and large, I’ve had kind of soft subjects when I deal with Americans. I think I made films about art collections, things like that. Rather innoxious. I do more of [the cutting-edge projects] in India.

TTN: In your classes and projects, you’ve made mention of this concept of “ethnosurrealism.” How do you define the ethnosurreal?
JJ: It comes out of my playing with visual anthropology and Indic ideas of “Maya” and “Leela.” Maya is “illusion,” and Leela is “play.” Not play as nonserious, play as highly serious, provocative creative exercise. And that’s what the Indic philosophy says, all life is play, and all life is illusion. So, it’s mixing some of those ideas. Ethnosurreal takes imagery from other places and puts them in contexts that are not exactly the same, … like people talk about ancestors in another place, but where are these ancestors? Our grandmothers, great-grandmothers, they’re dead. Now, they’re in heaven, but heaven doesn’t exist except in imagination, so how are the people [there]? What’s the topography of the place? Are they all sitting on cushions that float? Are they all eating ice cream up there?

Chelsea Calhoun can be reached at chelsea.calhoun@temple.edu.

Introducing Donna Grey, Captain Jeffrey Chapman, and Office Jonathan Goodson. As students settle into another school year, the stress of constantly hitting the books can leave them wanting to, well, hit the books. In Temple’s

People You Should KNOW: Alvaro Watson

Alvaro Watson, a first-year social work graduate student, is probably not as well-known as the organization he founded. Free-speech group Temple University Purpose has attracted regional attention several times since its inception in March 2009

Introducing Eran Preis. According to The Substance Abuse and Mental Health Services Administration, approximately one in five Americans suffered from any form of mental illness in 2010 – a figure totaling approximately 11.4 million. Such