Greg Gant may be an inspiring filmmaker, but he’s got the business smarts of an entrepreneur, the chic style of a fashionista and the indomitable swagger of a Temple student. The senior broadcast, telecommunication and mass media major launched a fashion line of T-shirts using the Temple “T” called Thug Life in January 2009. Gant is currently studying in London, but being overseas has not stopped him from expanding his business, with new designs slated to be released this spring.

The Temple News: What inspired you to start a line of Temple T-shirts? 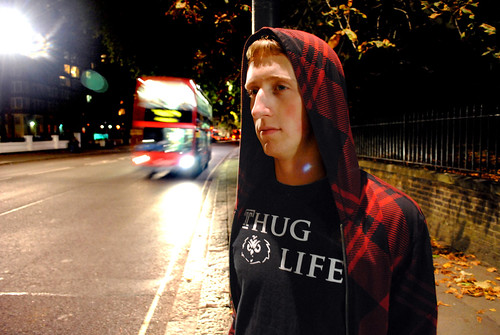 Greg Gant: During my sophomore year in Temple Towers, friends and I were talking about a friend who graduated and had made shirts. Tupac was playing, so we thought of “Thug Life.” I made a Facebook group – “Thug Life Shirts” – and made a stencil of the shirts, and I screen-printed it myself. It was really easy to do. People started to like the shirts, so I ordered 100 from California. I sold like 70 of the 100 to college and high school students, but when I was a junior that’s when it took off. I threw parties all year, and drunk kids could see my friends wearing the shirts. I would sell it to them on the spot.

TTN: Why make the shirts?

GG: Well, not really for the money. I don’t make that much money off it, and I could make more getting a job, but it’s cool to see my shirt all over campus. It’s cool to see your design and people enjoying it.

TTN: Do you see yourself as more of an entrepreneur or a film student?

GG: I would say I see myself as a combination of both. It’d be cool to start a business, and film and media is essential to any business. I’ve been trained in film. With the business thing, I learned what to sell, how to sell them, make sure people don’t d— me over and the whole marketing aspect of it.

TTN: Have you encountered many problems?

GG: I have a new spring line coming out that was supposed to come out last year, and I found a printer in Florida who said he’d make it for a really cheap price. I sent him the money and the design, and three months later, he said he couldn’t make the shirts. He started dodging my calls, so I called him nonstop. We agreed to change the design. When I received the shirts, he changed the design completely and sent only black-colored shirts and I lost a ton of sales. We almost went to court, but he gave me back money to break even.

TTN: Is studying in London affecting your business?

GG: Freshmen love my shirts and go crazy for them. I’ve been getting a lot of messages from people asking for them, but I don’t have any way to give them out because I’m in London. So, I’ve just been trying to build up hype for the spring line. I actually have been working on a website, thuglifeshirts.webs.com. I’m hoping the site will help me distribute the shirts to a wider area or demographic of people.

TTN: Why did you choose to study in London?

GG: I was originally supposed to study in London with a friend, but he [dropped] out on me. I thought getting an internship abroad would be great experience and a lot of fun, too. And I don’t have to take a foreign language now.

TTN: Where do you see the future of the business?

GG: I’m always worried Temple is going to shut me down or not let me graduate because I’m using the Temple “T.” But I’m having fun doing this, and all the other big schools have tons of kids that do this. This makes the school more popular because it’s apparel students really like and residents from the neighborhood find humor in the shirts.

TTN: What do you think of your competitors?

GG: I’ve seen shirts that say “Slut” and “Ghetto” [using the Temple “T.”] Those kinds are trashy, and the quality of shirts is terrible – it’s the wrong shade of red. The competition pushes the limits too far. I’m just trying to make funny shirts that represent Temple in a positive light and where it’s a fun place to be. It’d be cool if the bookstore sold them, too.

The Temple News: How’d you end up at Temple? Laura Anastor: I decided to come to Temple because of the area, because of Philly. I really wanted to be close to hospitals, so I decided

People you should know: Rosa Riley

Aside from working as the Resident Coordinator in 1940 residence hall, Rosa Riley also works at the Student Center Barnes and Noble and was once an intern with the Health Education Awareness Resource Team. If

Introducing Leroy Dubek. Physics professor Leroy Dubeck has been at Temple since 1965, when he began as an associate professor. Since then, he has not only conducted research in the physics field, but he is