Peter Liacouras, a former university president, law school dean and professor, and the namesake of several spots on Main Campus, died Thursday after a long illness, the university said in a statement. He was 85.

During his tenure as Temple’s president from 1982 to 2000, the university shifted from a commuter school toward Liacouras’ vision of a residential “urban village” campus, with a reputation bolstered by more fervent marketing, athletic prowess and recruitment of world-class faculty.

His 18-year presidency was second in length only to Russell Conwell, the university’s founder and first president, who served for 35 years until his death in 1925.

“There is no doubt in my mind that he laid the groundwork for the nationally respected university that Temple is today,” President Theobald said in a statement.

His death drew reaction from the Temple community on social media:

R.I.P. Former Pres. of Temple University Peter Liacouras thank you for all your advice and opportunities you gave me pic.twitter.com/1o4f4YQjJu

Though many administrators remember him fondly as a Temple sports fanatic who oversaw the growth of Main Campus and Temple’s national status, Liacouras’ tenure was not without crisis or controversy. Enrollment issues, two faculty strikes and stagnant or declining state funding hindered his ambitions. And, like past presidents, his plans for expansion sparked conflict within the surrounding community.

“He was somebody who didn’t just read the future, but he actually knew he could shape the future,” said Richard Englert, a university chancellor who served in several different positions under Liacouras. “He was an outside-the-box thinker, an enormously creative person, but he was also a very warm individual.”

As president, Liacouras set out to complete his vision of Temple that brought a sense of community to the Main Campus.

“The goal is for the campus to become a bustling community—as active by night as it is by day—enlivened by residents, restaurants, shops and other businesses,” Liacouras said in 1984.

To that end, Liacouras designated Park Mall as a site for commercial development, according to “Temple University: 125 Years of Service to Philadelphia, the Nation and the World,” a book by the university historian James Hilty.

Rowhouses on the stretch were refurbished and converted into a convenience store, restaurants and a bar. The university later named the plaza Liacouras Walk in his honor.

Liacouras saw to it that several residence halls were built to keep the growing student body on Main Campus, though he faced criticism for an increased emphasis on recruiting suburban students to live in them. In 1984, the university bought the Yorktown Apartments and renovated them into what is now Temple Towers. White Hall and 1940 residence hall were built in the ‘90s.

“Temple was, for so many years, just a ‘sidewalk’ campus and a commuter campus that people just pulled up to in their cars or buses or trains or subways,” Hilty said. “They got off, went to class, got back on and left. He had ambitions to create…a true living area, a true university life.”

The crowning achievement of Liacouras’ campus vision was The Apollo of Temple, which he envisioned after realizing that the university had no place to host commencement. Today, it’s named the Liacouras Center and hosts basketball games and events. 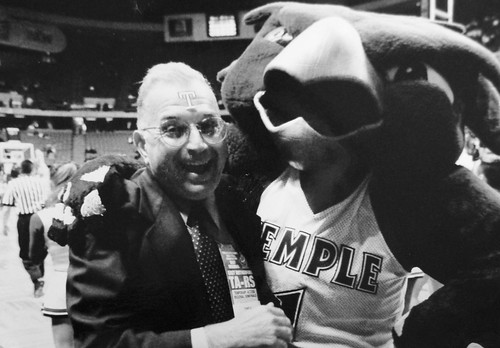 Even late into his life, Liacouras could be seen at Temple basketball games, cheering on the team from his wheelchair.

Ken Lawrence, now the university’s vice president for alumni relations, first met Liacouras as a high schooler. The president had invited several high-school students, including Lawrence, to have dinner at Sullivan Hall and attend a Temple basketball game together.

“He did not miss a basketball game,” Lawrence said. “He had his court-side seats and he was passionately involved in cheering for the team—and yelling at the referees.”

Soon after taking office, Liacouras hired Philadelphia native John Chaney away from Cheyney University, where he had coached a decade, to take the reins of Temple’s basketball team.

Under Chaney, the Owls made the March Madness tournament in 17 of 24 seasons.

In March 2013, an emotional Chaney embraced Liacouras at a reunion for the 1987-88 Temple basketball team, which entered March Madness as the No. 1 seed. The team lost to Duke University in the final, but has been commemorated at several Big 5 occasions since.

Liacouras, a former public defender and special assistant district attorney in Philadelphia, was the dean of Beasley School of Law from 1973 up to his presidency in 1982. During his time as dean, he oversaw efforts to recruit more diverse faculty and offer legal services to the North Philadelphia community

Liacouras implemented one of the first Affirmative Action programs in the country during his deanship, and the amount of women enrolled in Beasley rose from 3 percent to 50 percent, said professor Robert Reinstein, who served as dean shortly after Liacouras became president.

During his time as dean, Liacouras also established Temple-LEAP, a mock trial competition in which Philadelphia students work alongside attorneys and lawyers to learn about law and democracy.

“It’s hard to imagine for me a world without Peter,” Reinstein said. “[He] left an indelible imprint both on the law school and the university.”

Liacouras was known to walk through dining halls or the Student Center, waving and stopping to speak with students, Lawrence said.

Lawrence, who later worked with Liacouras in Temple Student Government, added: “A lot of the transformation that has occurred at Temple, occurred during his presidency. I think he’ll go down in history as one of Temple’s greatest presidents.”

Following in Russell Conwell’s footsteps, Liacouras was a “champion of the working class,” Englert said. Liacouras was the son of Greek shopkeepers and he never forgot his roots.

“He loved the underdog,” Englert added.

After his presidency, Liacouras came back to co-teach a graduate-level class with Englert about the administration of higher education. Before and after class, Englert said, Liacouras chatted with students and offered help on coursework or anything else they needed.

Temple will host a memorial service for Liacouras on Friday, May 20 at 11 a.m. in the Temple Performing Arts Center.
Contact the authors at news@temple-news.com.

Temple’s Master Plan, which began under Peter Liacouras, continues to shape the university’s vision of what it will look like in the future.