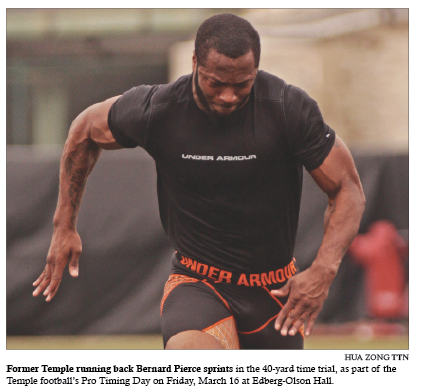 Temple hosted a Pro Day for seniors to display skills before the NFL Draft.

Bernard Pierce has been working for this chance since he graduated high school.

Getting the opportunity to play in the NFL hasn’t always been a sure thing for the Ardmore, Pa. native.

In his sophomore year in high school at Lower Merion, Pierce got into an altercation that landed him at Glen Mills School for troubled youth.

“Six years ago I wasn’t even thinking about college,” Pierce said.

Pierce needed to grow up, and that’s exactly what he did.

As he began to find success at Temple, Pierce again began to drift from his dream of being in the NFL.

“My sophomore year, with all the Heisman hype, everything really got to me,” Pierce said. “I kind of imploded and it wasn’t what I was expecting at all.”

For Pierce, his junior year turned everything around. He stopped going out, started caring more about academics and readjusted his focus on his dream.

This renewed focus was enforced by the presence of coach Steve Addazio, Pierce said.

“[Addazio] made me the player I am today,” Pierce said.

As Pierce finished his junior season, he decided it was time to move on to the next level, to fulfill his dream. In 2011, the three-time first-team All-Mid-Atlantic Conference honoree became the program’s all-time leader in rushing touchdowns (53), total touchdowns (54) and points scored (324).

Moving on wouldn’t exactly be easy though, with obstacles such as the NFL Combine and the draft.

But this time Pierce said he was ready for these obstacles. Pierce began a serious training regiment to prepare himself for NFL scouts to measure his talents at the 2012 NFL Combine and at Temple’s Pro Day on Friday, March 16.

“I’m on this field every day, even Saturdays doing speed work and working out five times a week,” Pierce said.

The product of his efforts was a 40-yard dash time under 4.4 seconds.

As the draft approaches, Pierce becomes one step closer to his dream. With that dream comes a set of different challenges. One major challenge, Addazio believes, could be made a lot less difficult if Pierce stayed for his senior season.

“[Pierce] is a young guy, he came out early and still needs to develop some maturity on the field,” Addazio said.

Things such as leadership, drive and an overall better knowledge for the game are pieces that come together and build an athlete’s on field maturity.

As the NFL Draft approaches, Pierce comes one step closer to his dream. That step also brings more obstacles to test the resiliency of the running back.

With his history of overcoming adversity, Pierce is now looking at his biggest challenge yet: the NFL.

Temple University football enters conference play with a 2-2 record after a convincing 28-0 win over the University of Massachusetts.

After losing seven starters, the Owls will need to replenish the defense at key positions. Despite losing six starters, including four All-Mid-American Conference honorees, the Owls’ defense is set to have significant depth for the

Letters to the editor

19 March 2012 The Temple News Letters to the Editor, Opinion

Dear Editor, On Saturday, March 24, the 2012 Intercollegiate U.S. China Healthcare Conference is being hosted at The Wharton School of the University of Pennsylvania. The goal of this conference–organized jointly by Global China Connection,