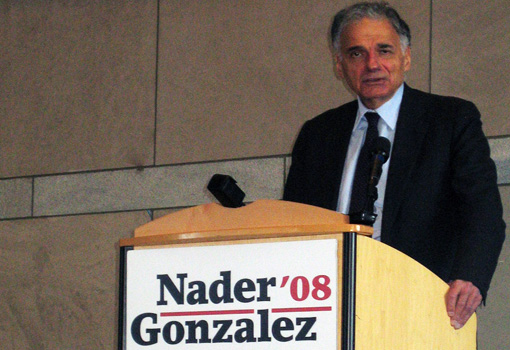 In his fifth run for president, public interest activist Ralph Nader spoke at the Constitution Center about the current state of politics.

“One of these days, the American people will say enough is enough,” he said

Nader called the neck-and-neck campaigns between Sens. Hillary Clinton and Barack Obama as “the same old rhetoric” and said the candidates consistently say one thing and do another.

During the press conference Saturday evening, the independent presidential candidate called the current state of politics in Pennsylvania as “William Penn’s worst nightmare.”

“[There is] sleaze and corruption people of Pennsylvania have to confront because they are paying the price of being defenseless against the activities of democrats and republicans,” he said.

He went on to speak about the Pennsylvania attorney general raiding the offices of state Democratic Party leaders and the grand jury that is currently convening to determine whether bonus pays were awarded to have independent candidates removed from the ballot.

But, if it happens again, “we’ll be ready for you,” Nader said.

Nader also called on the press to pay more attention to these activities.

“This invites investigation,” he said. “When state employees get bonuses to get a candidate off the ballot, that’s pretty serious.”

Pennsylvania has one of the most corrupt state Supreme Courts, Nader said.

He also condemned the war in Iraq. If elected, Nader said he would reduce the military budget and try to return what the government has “stolen” from Iraq and made taxpayers pay.

He said the solution to the war is to give Iraq and the oil back to its people.

The war was not Nader’s only grievance. He also targeted the current mortgage crisis. Nader referred to the policy of President Franklin D. Roosevelt’s policy of setting monthly mortgage payments at affordable levels.

“These reckless home mortgage lenders … have to pay the price for their profiteering,” Nader said.

With the ever rising cost of college tuition, Nader said he condemned the increasing amount of student loans coming from corporations instead of the Department of Education.

He pointed out that the United States is the only Western country that charges students as much as it does for college tuition.

“We should have a system where students have higher education access without mortgaging their futures,” he said.

Is that bias for Hillary Clinton or Barack Obama?

Failing to explain the point

Once Hurricane Katrina hit the Louisiana and Mississippi areas, it became a nationwide tragedy that was quickly overshadowed by a discussion about then-President George W. Bush, his passiveness toward the victims and, of all people,

On Nov. 4, some had problems making their votes count, and there are still questions two weeks later.