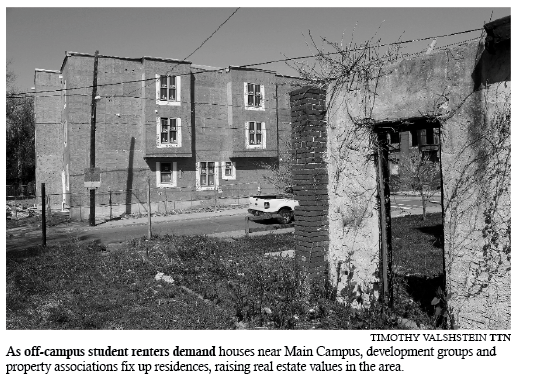 With the inclusion of a new residence hall, library, and state-of-the-art research facility, construction at Temple is on the rise.

The spike in construction not only denotes an already increasing student population, but also a surging demand for off-campus housing.

Patricia Anderson, a North Philadelphia resident since 1973, said she is skeptical about construction due to the vast amount of students that follow.

“I, myself, along with many other [North Philadelphia] residents am skeptical, however we don’t blame the students, but rather the institution itself,” Anderson said. “They want to keep expanding, which in turn means more students.”

According to the Philadelphia Office of Property Assessment, Temple Nest apartments bought three properties on the 1500 block of North 15th Street in January 2011 and a fourth in June 2011 for a combined total of $13. The market value of those properties now totals more than $678,000.

“The property developers are constantly trying to expand to keep up with the increase of students so what they will do is buy out individuals living on a block, which may only be several people, renovate it, and increase the rent,” Anderson said. “This then makes it impossible for many Philadelphia residents to move back in the area due to the high rent and increasing taxes, which is just not fair.”

“I think whenever you fill out a residential block through in-fill or other new construction, the costs of the construction per square foot is going to be far in excess of the existing market values of the properties and I think that has the effect of increasing market values,” Valenza said. “It’s generally a good thing to increase market values especially in times where market values have seen a significant drop over the past four years.”

Dor Berkovitz of RentCampus, an online-based property management group with a focus on students, said increasing enrollment beginning in 2005 – which led to a 20 percent increase of the student body until 2010 – has contributed to the demand for housing.

“Back in 2005, if you had the property at the right location; price pretty much stayed the same, or dropped down because there was not much competition then,” Berkovitz said. “There was way more demand but not enough inventory, but now supply and demand are nearing equality.”

“The competition between management groups is fierce, and some people really want to fill up the rooms and have the ability to do so along with driving up prices, but the majority of rental properties generally stay between $500 and $600 a month,” Berkovitz added.

Tom Citro, landlord and owner of Templenest Apartments, upholds the positive impact of such developments in “blighted neighborhoods,” asserting “it creates more comfortable, habitable housing for students and residents, while simultaneously promoting job growth within the area.”

In conjunction with the improvement of housing units, Citro cites the strides he has made to improve conditions around the block.

“Residents are happy especially with the 1500 block [of ] Carlisle [Street] in which I signed a three-year contract with PECO to set up lights even though it costs me $400 extra a month,” Citro said.

Landlords like Berkovitz, however sympathize with residents like Anderson who remain in fear of higher monthly rent combined with increasing yearly taxes.

“I feel for the residents who have lived here for many years and now 95 percent of the block is students, you have to face all the noise and partying, but unfortunately things change,” Berkovitz said.

Mark Staver can be reached at mark.staver@temple.edu.

Sean Carlin contributed to this report.

North Philadelphia residents said they were not alerted before the university’s stadium announcement last week.

Residents are all moved into their new housing, but not without some negative interactions with Temple students.

Free non-street parking at Temple will likely become a thing of the past when construction of a new academic building proposed at a June 17 Philadelphia City Planning Commission meeting begins. The new building —