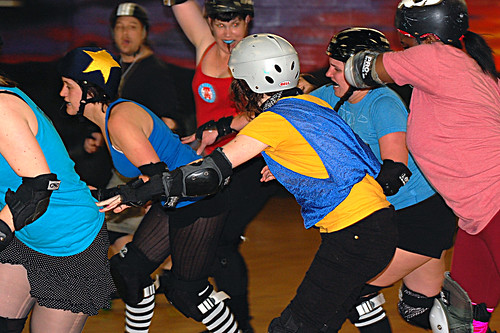 A group of comfortably dressed women in T-shirts and shorts sits in a spacious corner of the colorfully painted and brightly lit interior of Millennium Skate World. Their voices and laughter echo throughout the building as they stretch their legs and lace up well-worn skates.

It’s Sunday afternoon at the Camden roller rink, and the Philly Roller Girls All-Female Roller Derby League is having its weekly scrimmage practice.

Philly Roller Girls was founded in April 2005 after several skaters from the Penn Jersey She Devils decided to form their own league under the Women’s Flat Track Derby Association. The Philly Roller Girls have three home teams: the Philthy Britches, the Broad Street Butchers and the Heavy Metal Hookers. They also have a travel team, the Liberty Belles.

Though the teams proudly wear themed uniforms during bouts – bloody aprons for the Butchers, ruffled shorts for the Britches and zebra-striped spandex for the Hookers – audience entertainment results from the demanding commitment required to be a Roller Girl. The league is completely owned and operated by the skaters. Each woman is expected to pay $40 in monthly dues, buy her own gear and volunteer time to a league committee.

Practices are held every Monday, Wednesday and Sunday, and skaters are required to attend seven practices a month. Weeknight practices are devoted to training and endurance, while Sundays are strictly scrimmage days. Members of the travel team must make nine practices and stay for an extra hour on Monday nights.

This Sunday, April 13, is important because the “fresh meat” will scrimmage with the team for the first time. These are girls who haven’t completed a full season yet, and though they just completed mid-term evaluations, they will not be placed on teams until they graduate.
“It was definitely intimidating at first,” fresh meat Kelly Jurek said.

Jurek learned about the league when she attended a bout last winter.

“I thought it was the coolest thing that I had ever seen,” she said.

She then attended the league’s workshops that are held for prospective teammates. The workshops are structured like practices so that the women understand the physical stress of roller derby. More importantly, they teach the basics of skating.

Teflon Donna, captain of the Hookers and a skater for the Liberty Belles, didn’t know how to skate when she started more than three years ago. Though she is now described by her teammates as one of the best skaters in the league, she wasn’t the only one who had to learn.

“I hadn’t been on a pair of skates since I was a kid,” said Euro Thrash, another captain for the Hookers who just celebrated her one-year anniversary with the Roller Girls. “I was described as looking like I was a baby giraffe walking for the first time when I put on my skates.”

A game played on roller skates may not be the most traditional of sports, but roller derby definitely has rules. Each bout has an hour’s worth of play time, which is broken into either two 30-minute halves or three 20-minute periods. Players skate counterclockwise around the track for continuous two-minute jams. Each team sends out a lineup of one pivot, three blockers and one jammer.

The pivot sets the pace at the front of the pack and is the last line of defense. Behind her are three blockers, the main defensive players. Jammers start at the end of the pack and must work their way through the defense to the front. The first to establish herself as lead jammer can score points for her team and stop the other jammer from scoring.

“It’s just like every other team sport where you have to work together,” Black Eyed Susan, a blocker for the Hookers, said.

Sprains, broken fingers, bruises and knee injuries are all common in derby. Skaters wear stockings to help lessen bruising and burns from tumbles across the floor. Euro Thrash fell at a scrimmage practice in February and tore her meniscus.

“My doctor told me I’m lucky I’m so athletic,” she said. “Otherwise, the damage would have been permanent.”

Rules under WFTDA are designed to help protect skaters from more serious injuries. The area between a skater’s shoulders and knees is the legal block zone. The use of elbows or forearms to block is illegal. Helmets, elbow and knee pads and mouth guards are required during play.

WFTDA also puts a strong emphasis on sportsmanship. Fighting is strictly forbidden and can result in ejection and possible suspension from a bout.

“We definitely try to keep the audience involved and play to the audience, but at the same time, it is a full-contact sport like any other sport,” Teflon Donna said.

“I can go to work and come here and everything that was bothering me all day I can just take out in the rink,” Black Eyed Susan said.

The Philly Roller Girls will have a table at the Spring Fling on April 15. They don’t accept women under 21, but encourage girls to come learn about being a Roller Girl. When they aren’t slamming into each other in the rink, most of them are actually very close.

“At practice you’re hitting each other and tempers are flaring and you’re yelling at each other,” Euro Thrash said. “But at the end of the day, you’re still friends.”
It was the Philthy Britches’ Janet Meano who best summed up the attitude of a Roller Girl.

“I love the camaraderie, the healthy competition and the exercise,” she said. “It just fills every void that I have. It will save your life.”

Mary Elizabeth Coyle can be reached at mary.coyle@temple.edu.

The food service employees in the Student Center’s Valaida S. Walker Dining Court do not have pleasant attitudes at all, a phenomenon that has found its way into the commentary pages of The Temple News