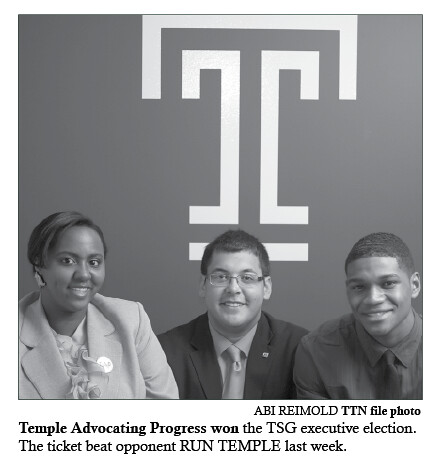 A new ticket is ready to assume the TSG executive office next semester.

“We have already begun our transition phases,” Lopez said. “We’re getting briefed on exactly what our roles will be.”

Lopez said TAP plans to meet with the President Ann Weaver Hart as soon as possible “to be there so we have a presence.”

The team hopes to meet with residential life to discuss progress on the new dorm building at Broad Street and Cecil B. Moore Avenue, as part of Temple’s 20/20 plan. Lopez cited concerns about food options and the availability of housing with the new building, as well as requests from students for “the possibility of gender neutral housing” or “gender neutral bathrooms.”

Lopez said TAP will not make many executive decisions this semester.

“We’re really going to fix TSG toward the beginning of next semester…over the course of the summer, I want to make sure all the people in TSG understand their roles,” Lopez said.

TAP has said it wants to restructure student government and increase awareness of the organization on campus.

“We want to make sure we can get as many people there as possible,” Lopez said. “Talk to a lot of freshmen, go to residence halls, [student organization] meetings…We don’t want to take a particular focus, we want to focus on it all.”

Lopez estimated his team spent just under $1,000 on the campaign. RUN TEMPLE, TAP’s opposition, declined to disclose its campaign spending.

While TSG does not give money to candidates, it has a budget of $2,500 for the election, which can go toward advertising, room reservations and giveaways, TSG Elections Commissioner Shanee Satchell said via email. Candidates must raise their own funds.

“They can do this through donations, their own pockets, etc.,” she said, adding that TSG sets a spending cap for campaigns at $1,000 for executive tickets and $300 for General Assembly positions. These caps include donations.

The caps are compared to the estimated $10 to $30 spent by General Assembly director candidates for fliers, Satchell said.

This year’s voter turnout slightly decreased from last year’s executive election. A total of 2,647 votes were cast this year, compared to the 2,759 last year.

“I am a little surprised,” Lopez said. “It also kind of shows just how apathetic student [organizations] are to TSG, or how much they don’t know about it.”

Freshmen Kristen Dunlap and Sarah Szwydko said they only voted because members of TSG were handing out fliers in front of the TECH Center on election day.

Cindy Nguyen, a junior political science major, said she heard about the election from an email sent by TSG.

Nguyen said she voted so “that the people that I voted for will do, you know, what the students want.”

She said increased fliers and campus events, in addition to emails, could improve students’ awareness of TSG.

“Some people just don’t read [emails]. They just delete it from their mailbox,” she said.

Amelia Brust can be reached at abrust@temple.edu.

Letter to the Editor: Barry Scatton

Dear Editor, Representatives from Temple Student Government and Students for Environmental Action presented a mandatory green tax proposal to Temple’s fees committee in February. I would like to highlight a few things that everyone at