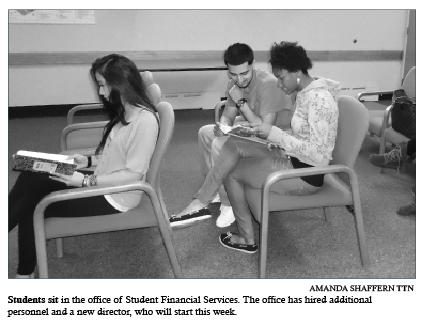 For the past few years, students have voiced their dissatisfaction with the Office of Student Financial Services and its resources. However, last semester, the office hired additional officers and will bring in a new director.

Jodi Laufgraben, vice provost for academic affairs and assessment, said in October that SFS is aware of the student dissatisfaction, and assured the student body that a series of meetings were underway to streamline issues within SFS.

In addition to streamlining these issues and helping students become more aware of the holds on their accounts, a university-wide search for a new director of SFS ended last week. Current director Jim F. Morris plans to retire, and will be replaced by Craig Fennell, former executive director of student financial assistance at Arizona State University. Fennell will begin fulfilling his position this week.

One of the main problems students encountered was account holds during registration. Last semester, SFS put approximately 8,000 accounts on hold, down from the 9,700 holds from Spring 2011.

This semester, Laufgraben said that although she didn’t have any of the statistics on-hand, the numbers are comparable.

“There aren’t any unusual spikes there,” Laufgraben said. “We do know that because of the economy, more students are needing financial assistance and coming to Student Financial Services raising concerns about their ability to pay, but we would not say that there’s been an unusual spike in the number of holds.”

“Holds go up because students have past balances that need to be paid,” Kimberly Taylor-Benns, associate director of SFS, said. “One of the things we want to do from a customer service perspective is to make sure a student is not acquiring more charges in debt that they can’t handle or pay past the past debt.”

“So the hold is just a trigger to get [students] to come talk to us and say, how can we resolve this, is there more aid, more funding, whatever the issue might be,” Taylor-Benns added.

Freshman musical performance major Marcus Grant said that last semester when he went to SFS to discuss a hold on his account, his experience was frustrating and unhelpful.

“[SFS] was kind of mean about it,” Grant said. “I know there’s a lot people who have a lot of issues to take care of. All I needed was five minutes from them to tell me what I needed to do and I would do it.”

Grant said that the process wasn’t as streamlined as he hoped. SFS employees sent him to several offices to get the answer he needed, he said.

“It took me like a week to know what I needed to do,” he said. “I was getting different information from different people…and it was just a rough situation.”

Grant pays for a portion of tuition, and the difference is supplemented through loans. He said he’s not looking forward to the point when he has to go back.

“If I have to [go back to SFS], I know what to expect,” Grant said. “I would plan to just block out my day for financial aid.”

To aid with the huge influx of students each week, SFS also changed its hours last semester. The office now closes early on Fridays at 1 p.m. for processing.

However, Taylor-Benns said that there are better times for students to come to the office, especially earlier in the summer before the fall semester.

“Instead of waiting for that August rush, come into the office early, all summer,” she said. “We’re there and we’re working, but then in August is when everything picks up…so if there’s a way to communicate that the earlier the better, then you can resolve the issues earlier.”

Looking to the 2012-13 academic year, SFS said it was looking to make great improvements now, especially in terms of communication.

Taylor-Benns and Laufgraben agreed that they are trying to better communicate the financial aid process through Self-Service Banner, as well as help students to better understand the information provided to them.

“We just want to demystify it for students because I know it’s hard to grasp…so we just want to make sure that [they] understand it,” Laufgraben said.

Junior environmental studies major Susie Hockman said while SFS has been communicating holds on her account well, the office has still been frustrating.

About a month and a half ago, Hockman said she went to the office dealing with a loan she took out with a different organization.

“I met with [SFS] numerous times, but they kept delaying the time it would be distributed and they messed up the amount of the loan,” Hockman said.

“Pretty much every experience has been frustrating and a long wait,” Hockman added. “I’ve left wanting to break down in tears and feeling belittled.”

Hockman recounted one instance with an SFS employee, during which she asked him if he had a phone, as she had called several times but he hadn’t answered.

“He said, ‘Oh, I must have had my headphones in and not heard it ring,’” she said.

Despite the improved communication on the office’s part, students still have reservations about how simple the process will actually be.

“I think they should rate the actual problem [students] have, and that would get a lot of people out the door quicker,” Grant said.

“Maybe they could be a little more professional,” Hockman said. “We’re a student body, we’re not mathematicians. We need help, we need financial aid. Finances are a hard thing to deal with. I think they could just be helpful, less careless and more respectful to more parents.”

The SFS office remains hopeful that the new director and the office’s new initiatives will further improve the next academic year.

Matthew Hulmes and Alexis Sachdev can be reached at news@temple-news.com.

Communication has to be a two-way street when it comes to student finances. It is no surprise that the majority of students at Temple share the same sentiment that Student Financial Services isn’t providing the

Temple’s Student Financial Services is inferior to that of
Penn State and ASU.