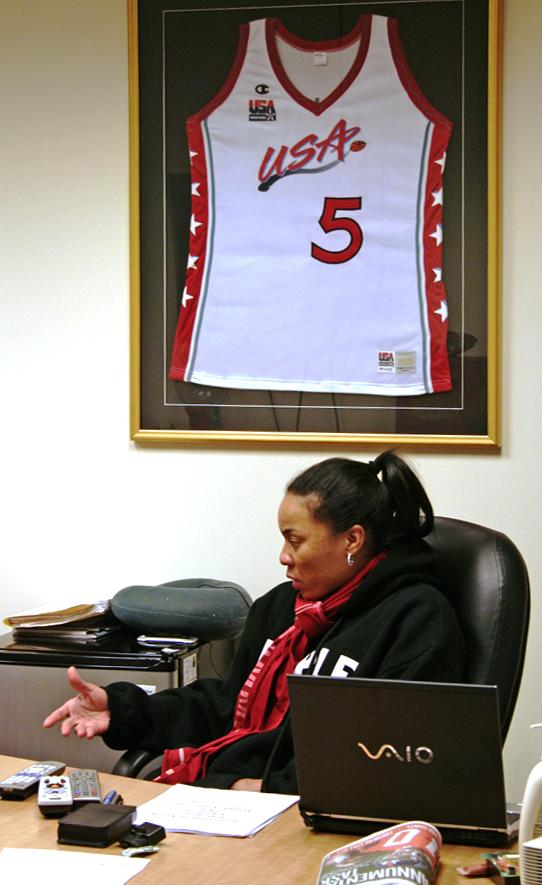 “It actually really caught me off guard. I’ve been associated with a lot of different good and positive things throughout the years and my career, both mainly having to do with basketball,” Staley said. “I think they selected me for my contributions to the sport and also my contributions to what I represent in the black community.”

Last month, The Black List: Volume One premiered at the Sundance Film Festival. The documentary features the stories of 20 of the most influential and inspirational African Americans of our time.
The documentary is collaboration between former New York Times film critic Elvis Mitchell and director Timothy Greenfield-Sanders. The film has been sold to HBO Documentary Films. The Black List is about each individual’s life and career, as well as what life was like for them growing up as a person of color. Those featured represent the world of sports, politics and the arts.

Staley said she never had big dreams growing up but knew she always wanted to play basketball.
“Just the love of the game really allowed other doors to open up to see what it is I can do with basketball – that I could touch lives on a daily basis and I could make a living playing the game, coaching the game, staying within the game. I truly do count my blessings because it could have been someone else,” Staley said.

She played basketball at the University of Virginia and led her team to four NCAA Tournaments, three Final Fours and one National Championship. In 1999, she was drafted by the WNBA Charlotte Sting. Staley has three Olympic Gold medals from the 1996, 2000 and 2004 Olympics.

This is Staley’s eighth year as the coach of the women’s basketball team, but she said it wasn’t all the accolades that helped her to get where she is now.

“I grew up in the projects right here in North Philadelphia,” she said. “Although I grew up in the projects, it is where I got my foundation, and a lot of people would not be proud of where they got their start. I’m very proud of where I got my start because it humbled me. All the successes and failures shaped who I am today. I see things differently and I have an appreciation for different things.”

She said she has always had to beat the odds. She attributes her mom’s influence to her overcoming the many challenges she’s faced in life.

“There’s only one way, and that’s to work hard. And I just want people to see how much work goes into someone being successful.

“Without strife, you can’t fully understand what it is to succeed. I think everyone that’s in the documentary has had some kind of strife, has some kind of pull on them that made them make choices, good or bad, they were choices that shaped who they are,” she said.

Staley’s players know how hard she has worked. This is senior center Lady Comfort’s fourth year playing for Staley. Comfort said she is proud of what her coach has done for her and for the team.

“I think it’s a great accomplishment for her. But for me, I think it’s just an honor to be around her, not only as a player, but also as her friend,” Comfort said. “To be there and congratulate her on awards and such in the past . . . and now this. I think it’s just a great honor for her.”

Staley said it was hard to imagine herself alongside some of the others in the documentary, but she is happy to see everyone’s stories reach a national audience.

“I consider myself a ray of hope to someone who grew up like I grew up in the projects of Philadelphia, but never would I have put myself among those that are participating in this documentary,” Staley said.

“It’s great company to be in,” she continued. “For what those people stand for and what they had to endure to get to where they are today – maybe our paths are a little bit different, but what’s synonymous with all of us is being determined. I’m just glad our stories are going to be shared among a lot of different people.”