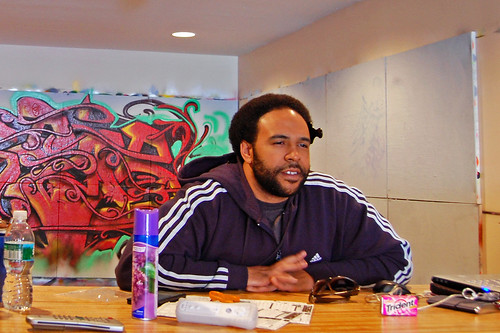 The misconceptions and stereotypes that cloud the reputation of street art are quickly becoming ideas of the past, thanks to one man and his store.

Eric Cohen is the owner of Rarebreed, a store dedicated to hip-hop and street art culture. He is responsible for changing the name of graffiti in the city – from “destruction” to “artistic expression.”

“[Graffiti] doesn’t get the recognition or props that it deserves,” Cohen said. “Some people still consider it a form of vandalism, but it’s a skill. It involves knowing your color palettes. [Not just] any chum off the block is able to do it.”

Cohen’s presence in Philadelphia is a large one. He opened Rarebreed five years ago, and three location changes later, he is still an important name in the world of Philly graffiti.

“I think that if I wasn’t here, people would still be turning their nose to graffiti as an art form,” Cohen said. “With me being here for as long as I have been, people are starting to recognize it and give it the respect that it deserves.”

Cohen said that the graffiti scene in Philadelphia is tough to break into and even tougher to excel in. If the street artists who devote their lives to graffiti notice that a new artist isn’t as serious about graffiti as they are, they get angry – and the newbie gets trash-talked out of the scene.

Artists who have a common appreciation and understanding for the art form band together to form cliques. These groups work on the streets and provide a family-like support system for each other.

“Graffiti isn’t like a commercial thing or something to do to be cool in Philadelphia,” Cohen said. “It’s a way of life.”

Rarebreed showcases different graffiti artists each month in themed gallery exhibitions. Cohen doesn’t have to search hard in order to find talent – most of the featured artists approach him. For those involved with graffiti, showing work at Rarebreed is considered a high honor.

“I’m really picky with who I decide to showcase,” Cohen said. “I really try to see who is getting rep out on the streets in Philly and listen to what the people on the street have to say.”

In addition to showing art, Rarebreed sells the materials needed to become a street artist. The store sells Montana spray paint, which is imported from Germany and comes in an assortment of colors, from neon pink to baby blue. Rarebreed also sells sketchbooks, ink, books on the graffiti culture and custom Rarebreed T-shirts. While most of its customers are younger, generally high school- or college-aged, there is also an older crowd who stops by the store from time to time.

“Those are mostly the old-school writers who used to write out here in Philly and just want to let people know that they’re still around,” Cohen said. “I open up doors for anybody else who’s interested in the culture. [Graffiti] is applying some type of meaning to a wall. It’s a source that is meaningful to others.”

Graffiti may be a medium for artistic expression, but it comes with tradition and territory. An underdog can’t go out on the streets without any training and expect to make great graffiti. They need to be guided toward street art success.

“The tradition of Philadelphia graffiti is to have somebody to put you up under their wing,” Cohen said. “Anybody can go and do graffiti and hopefully figure out a technique or form, but no matter what, whoever it is will still have to [seek] reference from somebody else to [develop] some kind of style.”

The hope is that once an artist perfects someone else’s craft, he or she will take that person’s style and make it his or her own.

In Cohen’s opinion, the biggest misconception about graffiti is that it is vandalism. His mission is to bring to light the positive aspects of graffiti – its artistic merits and the skill sets it helps to develop.

“I love the colors and the mystery in it because you don’t really know who [made each piece of graffiti]. It raises questions, like, ‘How’d they do that?’” Cohen said. “It’s definitely not what you see when you go to an art museum or an art class, but it’s the art of the letter.”

After a report by Fox 29, Temple released a statement on the campus threat.