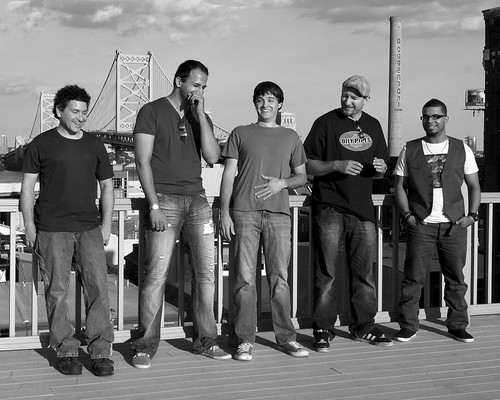 It’s been a complicated few years for Dayseam. With lost relationships, changes to the band’s lineup and a surplus of musical experimentation, there have been, to say the least, ups and downs.

Lead guitarist Ehsan Ahmed attributes the formation of the band to the need for something to be inspired by, or a “pursuit of something deeper.” Often compared to other hard-edged rock groups such as Placebo, Smashing Pumpkins and Silversun Pickups, Dayseam was established with a desire to not be taken too seriously, but still become a reflection of the band members themselves. In return, their music becomes deeply personal songs based on their own experiences.

The band’s members reign from as far as Queens, N.Y. and Chicago but call Philadelphia their place to perform, live and work. The Temple News talked with Ahmad and Steve Mroozian, lead vocalist and rhythm guitar player, about Philly’s influence on the band, their new album, “Cautiously Optimistic”, and who they dream of sharing a stage with.

TTN: How did you come up with the name Dayseam for your band?

Ehsan Ahmed: We were looking to make a choice and hadn’t decided on a band name. On one hand we wanted it to mean something, but on the other hand names don’t matter. Steve and I were working then for a Fortune 500 company and were just going through our days. Has there ever been a point in a day when you go through the existence you created for yourself when you’re meant for something more? [Our name is] kind of that hopeful eye, or something you aspire for. A pocket or seam in a day with little lights [of hope].

TTN: How does the Philly music scene influence your band?

EA: Philly gets a bad rap for being a little angry, but there’s also a great positive vibe here. Philly’s musical scene has a lot of new and original bands and there is a hunger out there to be part of that niche.

Steve Mroozian: One of the best things about Philly is proximity, and how you can get to so many great places in an hour.

TTN: How did you go about creating “Cautiously Optimistic?”

SM: We spent a long time working on that and it took two years to finish. It was a process of our trials and tribulations. The relationships we were in deteriorated as music became [an important] part of our lives and girls resented that fact. It was about finding new beginnings, getting out there and finding new music.

TTN: If each of you could have Dayseam open for any band, dead or alive, who would it be?

EA: It’s hard to say if it would be an indie band because I love them or a bigger band but, [I’ll go with] the Shout Out Louds or Sound Garden because I love Chris Cornell. Well, I’d love to open for Tool but we’d probably get murdered.

Danielle Miess can be reached at danielle.miess@temple.edu.