Though the tradition holds fast at more traditional schools, Syllabus Week doesn’t have a strong foothold in Temple’s urban community.

Syllabus Week. It’s defined by Urban Dictionary as a ‘party week’ and “The first week of classes, during which all time is wasted by reading through the syllabus.”

Students in schools such as Penn State University celebrate by taking advantage of the fact the easiest week of the semester has arrived.

Huey Mack, a rapper from West Virginia University has a song dedicated to the first week of classes, appropriately titled “Syllabus Week.” The song with lyrics like, “having fun, living life how I choose. I ain’t gotta go to class, so you know what I’ma do. Get drunk, get high, get dro. Do something crazy, blackout who knows,” might make you wonder where the festivities are on your campus.

While the idea of taking a week off from classes to party would seem appealing to some, it appears Temple students have a different approach. They seem more eager to hit the books than the booze.

Sophomore education major, Naisha Soto had never even heard of Syllabus Week, but did have her first week planned out. 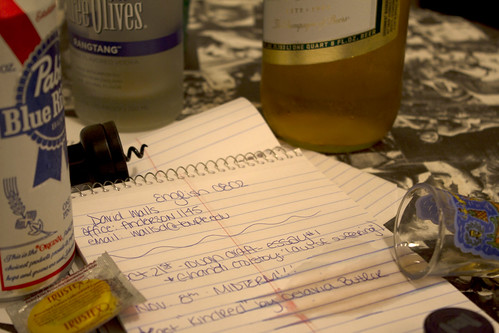 “I’ll go to all of my classes,” Soto said. “I probably won’t buy my books the first week, probably won’t even buy them the second week. I’ll probably sleep a lot since we won’t have any work.”

Shayne Maister, a freshman music therapy major said she isn’t sure what her first week of college has in store for her. She plans to take her time getting acclimated to the campus.

“I obviously can’t learn in a place I’m not familiar with,” Maister said. “Classes are definitely my first priority, but I definitely want to get to know the campus, scope out who I’m going to hang out with, and stuff like that.”

Like Soto, Maister said she doesn’t plan on purchasing her books before the semester begins because she was told to wait until she gets to class to see what the professor actually requires.

“That’s been a problem,” Thomas Morton, a Spanish professor said. “We’d like them to have the books the first day, or at least the first week but the reality is that there is a percentage who [wait] three weeks before they [buy] the book.”

Besides books, Morton finds other ways to test his students.

“I look for students up to the challenge of the class and whether or not they’re going to stay in the class. The first two weeks are unstable.”

“Some professors, especially the sciences classes, on the first or second day of class they’ll give out some sort of quiz on a wide range of material,” Matt Dickisson, a junior civil engineering major, said. “And they use it to see where each person in the class stands, which shows the professor cares quite a bit about the students.”

“I mean, most of my classes the first time I go it’s just like, ‘here’s the syllabus, see you next class,” Soto said. “We don’t even stay the whole class period. Professors definitely use the time to slack-off.”

Academics aside there is a completely different realm of Syllabus Week that no one at Temple really delves into.

“Honestly, I don’t really know anyone who’s [partying],”Dickisson said. “I’m aware some small parties might be going on, hell I might even attend one or two but it’s certainly not anything like taking a whole week off.”

Nick, the owner of the company, said he currently has more than 700 orders to all of the campuses he distributes to.

“I think Syllabus Week is more of an unspoken tradition everyone takes part in,” said Nick, 25, reminiscing on his days as an undergraduate at West Chester University. “I’d call it an unofficial holiday.”

With Syllabus Week having all the ingredients of a college phenomenon, it seems to hold more ground with schools located in college towns, rather than in schools like Temple, located in a more urban area.

Philadelphia is one of the largest cities in the country, definitely giving Temple students more options to occupy their free time, while Penn State students are left to their own devices in College Park.

Dave Harrington, a junior political science major at Penn State University attributes the popularity of Syllabus Week at his school and the drinking it’s associated with to there being nothing else to do.

“It’s not as much Penn State is connected to the downtown, it’s that we have our own section of downtown that’s basically connected to us,” Harrington said. “A lot of the local residents don’t live there, it’s mostly college kids that come in. The local businesses know that Syllabus Week is more of a weekend than a week.”

Harrington said you’d probably find more students going out in State College than Temple during Syllabus Week because it’s all college students and no locals, unlike Temple students who usually immerse themselves with the locals when they move off campus.

Temple students hold off on weekday partying until after the first week.

“For right now, at least, I don’t plan on engaging in any Thirsty Thursdays,“ Maister said. “I don’t want to go into class on Friday with a hangover.”

Harrington also plans on having a tame Syllabus Week.

“I usually try to not go out when there’s class the next day. I figure I’m taking out student loans to [go to school], so I might as well take full advantage,” Harrington said. “But that’s not to say I won’t go out for a later dinner or catch a movie with some friends.”

The beginning of a new semester at Temple starts off with more excitement for classes than dread, with everyone wanting to look their best and not making it obvious they’re recovering from a rough night.

“I see more [people going to class hung over] happening later on in the semester where people are just tired of going to class,” Soto said. “Usually the first week I’m excited to go to class so I don’t show up looking like a bum. I’ll save the sweatpants for later.”

Luis Rodriguez can be reached at luis.fernando@temple.edu.