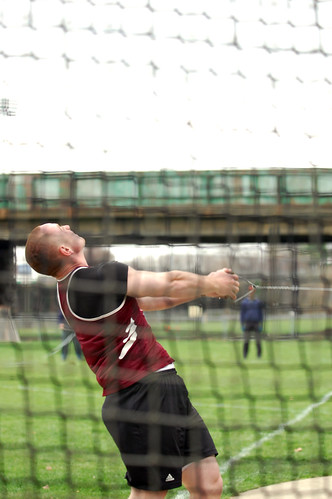 A cool wind whispered along the field as sophomore Tim Boeni stood anxiously awaiting his turn in the long jump at Saturday’s Penn Invitational at Franklin Field.

When his turn finally came, Boeni sprinted toward the sand and launched himself into the breeze, landing 23-3 1/2 feet away from the take-off point. The distance earned Boeni first place in the event and qualified him for next month’s IC4A Championships in Princeton, N.J.

“He did a nice [job] on the long jump,” track and field coach Stefanie Scalessa said. “He’s looking very healthy.”

There’s nothing like being at home to bring out the heart in a competitor.

And the track and field teams were competitive at the unscored competition, which was the second outdoor meet for the Owls and the first held in Philadelphia for the squad this season.
Along with Boeni, the men’s team had two other IC4A qualifiers. Sophomore Brad McFadden qualified with a third-place time of 53.66 in the 400m hurdles, while the 4×100 relay team’s time of 42.04 also met IC4A standards and earned them a fourth place finish in the event.

The women’s team also made an impressive showing with freshman Assata Cowart pacing the way for the Owls three individual ECAC qualifiers. Cowart won the 400m with a 1:02.17 finish while fellow classmate Paris Williams captured second with her best effort of the season at 55.85.

Junior Devon DuPont finished second in the long jump with a qualifying distance of 18-9 1/4, while the 4×100 and 4×400 relay team’s finished first and second respectively to round out the list of ECAC qualifiers.

“It’s early yet,” Scalessa said. “Our team is young, and it’s great having the freshman performers. It definitely doesn’t hurt.”
Although the Owls were close to home, Scalessa said Temple’s success was carried by other factors.

“What was really nice was that the weather was so great,” Scalessa said. “It was also surprising the support we received from Temple students, alumni and Temple fans in general.”
With temperatures in the mid-60s both the men’s and women’s teams didn’t let their supporters down.

The Owls, who will return to Franklin Field in less than three weeks for the Penn Relays, recorded 16 top 10 finishes during the competition.

In addition to their IC4A and ECAC qualifers, the teams also had impressive showings from senior Marcos Edghill, whose 14th place showing in the 200m (22.48) was outdone by his own third place finish in the 100m (11.04). Senior Cheryl Anscombe (25.04) and junior Carlleen Allison (25.10) placed first and second, respectively, in the women’s 200m.

From the field, junior Amanda Cole continued her strong season, finishing first in the hammer throw with a distance of 168-8, while sophomore Grant West (167-3) and freshman Bob Keough (155-6) finished third and sixth in the event for the men’s team.

This weekend, the Owls will travel to the University of Virginia for the Lou Onesty Invitational.

Matt Nadu can be reached at m.nadu@temple.edu.

For seniors , the time is now or never.