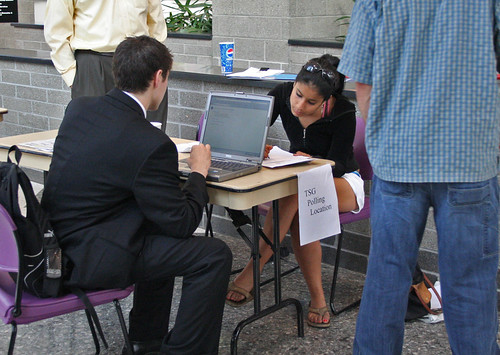 Results from last week’s election have forced Temple Student Government to hold run-off elections on April 30 and May 1.
Although Owl V.O.I.C.E.S. won with 897 votes, they did not have enough of a majority for an outright victory.

“We’re very excited about the run-off elections. According to the Elections Code, Temple Reloaded had every right to ask for a run-off election,” said Nadine Mompremier, presidential candidate for Owl V.O.I.C.E.S. “We look forward to campaigning again and getting the majority vote.”

“[Temple Reloaded has] run a campaign with integrity, within the guidelines of the election rules, and we feel that they will be excellent advocates for the ambitions of the student body,” said Shiv Sethi, former vice presidential candidate of external affairs for Owl Opportunity.

Temple Reloaded members said they were grateful to Owl Opportunity for their plans to help Temple Reloaded with the campaign for the run-off election.

“Our alliance embodies our ability to work with others,” said Jeff Dempsey, presidential candidate from Temple Reloaded.

Temple Reloaded and Owl V.O.I.C.E.S. have one more week to campaign before the election on April 30 and May 1. Both groups plan on keeping similar strategies in their campaign.

Owl V.O.I.C.E.S. intends on talking to more people and explaining its slate to the student body. During the last campaign, it also contacted members of student organizations, encouraging them to vote for Owl V.O.I.C.E.S. It plans to keep the same strategies but are a little concerned about how involved students will be in the last week of classes.

“The decision for Temple Reloaded to want to have a run off is completely fair according to the elections code, but the timing in regards to the student body and taking finals is something that may have needed to be taken into consideration,” said Nexus Cook, vice presidential candidate of external affairs from Owl V.O.I.C.E.S.

The candidates for Owl V.O.I.C.E.S. are Mompremier, Cook and Farzad Firoz, vice president of services.

If elected, their platform calls for focusing on communication and strengthening TSG, athletics and student organizations. They claim to be the most experienced slate, with their slogan “Change through experience.”

Rebecca Hale can be reached at rebecca.hale@temple.edu

In preparation for election, students got first opportunity to ask candidates questions.

Former Freshman Parliament Representative Karim Alazzam was given the option to resign or face impeachment after making the post.

The winning ticket garnered about 66 percent of the vote.