Carmela Apolonio Hernandez shares a small, cinder block bedroom with her four children inside of a church.

The siblings sleep together, two-by-two when they need comfort at night. Hernandez sleeps on a couch nearby.

Hernandez and her children — Fidel, 16; Keyri, 14; Yoselin, 12; and Edwin, 10 — who are undocumented immigrants, originally from Mexico, lived in sanctuary for about a year at the Church of the Advocate on Diamond Street near Gratz from December 2017 until last month.

The family wanted a fresh living space, Hernandez said, so they moved to the Germantown Mennonite Church on Washington Lane near Germantown Avenue on Dec. 9, 2018.

Private Bill
A private bill is legislation affecting a single person or company, rather than a jurisdiction or other larger population. Private bills occur rarely and mostly create exceptions in existing laws in fields like citizenship and taxation.

Sanctuary City
A sanctuary city has laws or other practices to obstruct immigration enforcement. Action can include imposing strict legal conditions on apprehending undocumented people to refusing to share municipal data. Philadelphia is among more than 200 jurisdictions nationwide who are considered sanctuary cities.

“I wanted a change of environment, even if it was an enclosed environment,” Hernandez said in Spanish, translated by The Temple News. “…[The Germantown Mennonite Church] came together to give us sanctuary, and it demonstrates that it’s no longer one or two churches in Philadelphia that are giving sanctuary. There any many that are supporting immigrant sanctuary.”

Still, Hernandez was denied asylum and fears for the safety of her and her family if they return to Mexico. She fled with her children after her brother and two nephews were killed by organized drug criminals.

The Hernandez family is in danger of deportation if it leaves the church, said Blanca Pacheco, the co-director of the New Sanctuary Movement of Philadelphia, an organization that advocates for undocumented immigrants.

U.S. Immigration and Customs Enforcement, the federal agency that enforces immigration policy, tries not to attempt to deport people known to be undocumented in “sensitive locations,” like schools and places of worship, an ICE official from the Philadelphia Field Office wrote in an email to The Temple News. 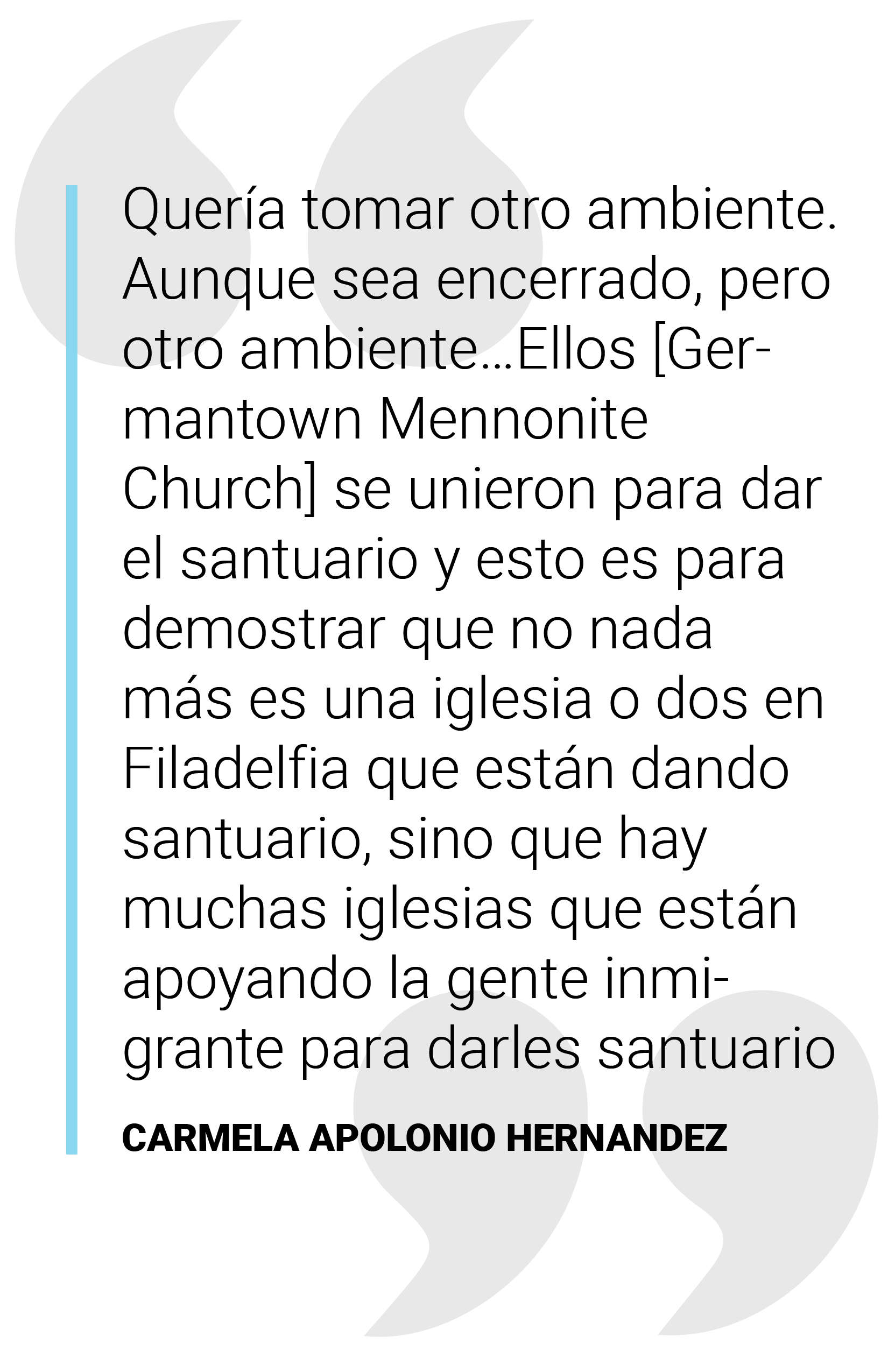 I wanted a change of environment, even if it was an enclosed environment. …[The Germantown Mennonite Church] came together to give us sanctuary, and it demonstrates that it’s no longer one or two churches in Philadelphia that are giving sanctuary. There any many that are supporting immigrant sanctuary.

The agency has allowed Hernandez time to determine how to get back to Mexico since a judge issued a deportation order in September 2016, the official wrote. ICE cannot, however, enforce the order at a sensitive location without “prior approval from an appropriate supervisory official or exigent circumstances necessitating immediate action.”

Staff from the Church at the Advocate visit Hernandez frequently at her new location, said John Bergen, an associate pastor at the Germantown Mennonite Church.

Hernandez has been facing health complications for the past couple of weeks, she said, due to stress and lack of open air.

“There are days I feel good and some I feel bad,” Hernandez said. “…Sometimes, I have the strength to keep fighting, but there are other times when I don’t.”

“Living in sanctuary is quite hard,” Hernandez added.

The New Sanctuary Movement of Philadelphia brought doctors to the Germantown church to care for Hernandez, said Pacheco, who has been aiding Hernandez through her time in sanctuary. The family’s relocation to Germantown was carefully planned and ICE was notified of their new location, Pacheco said.

Philadelphia is considered a “Welcoming City,” often referred to as a “sanctuary city,” which means its city agencies, including police, are not allowed to ask about people’s documentation status, according to the Office of Immigrant Affairs.

After weeks of protest in July 2018, Mayor Jim Kenney announced the city would no longer share its Preliminary Arraignment Reporting System with ICE. PARS collects arrest data, including personal information like race and nationality, which pro-immigrant activists said ICE could use to detain and deport individuals suspected to be undocumented.

In October 2018, Hernandez participated in a sit-in protest in United States Sen. Bob Casey’s Philadelphia office asking Casey to introduce a private bill for her permanent residency in the U.S., The Temple News reported.

Casey’s office could not be immediately reached for comment.

Congress and President Donald Trump’s administration are discussing border security legislation and have three weeks to determine an immigration deal before federal government funding expires again, Politico reported. The government was partially shut down for a record 35 days through December 2018 and January over disagreements between Trump and Democratic congressional leaders on whether to provide funding for a border wall along the U.S.-Mexico border.

I’m very grateful to the people of Philadelphia because there are a lot of people who know about my case. Some people don’t know but they start to know little by little and they are always willing to help in any way they can. 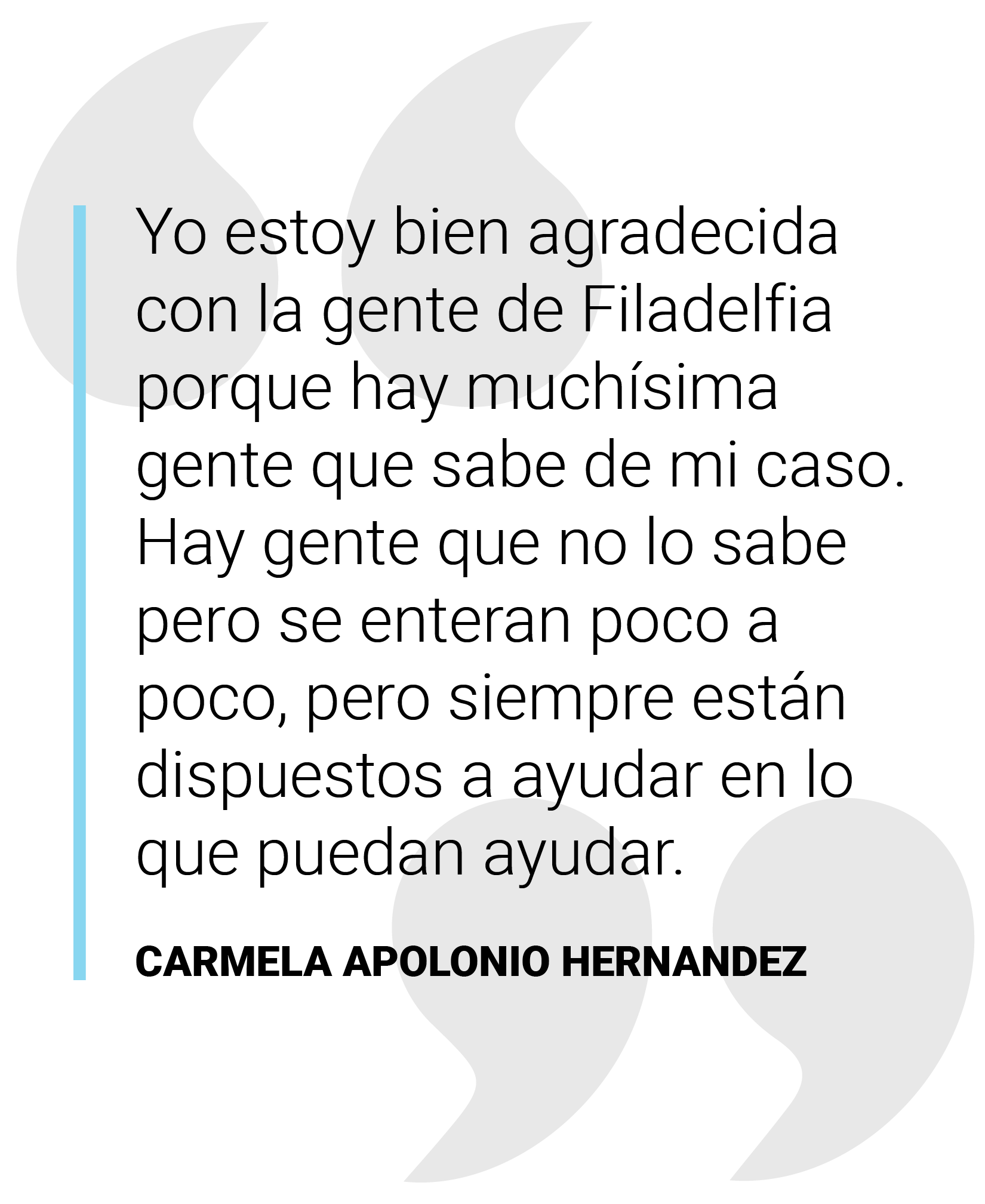 As the country’s leaders determine a response to illegal immigration, the four Hernandez children are still attending school, one of the few places other than the Germantown church they can go without the threat of deportation.

The Hernandez kids can see the bus from inside the church and run to it. The bus ride takes an hour each way. Their friends can come over to the church to play after school, but they can’t go to their houses.

“I’m very grateful to the people of Philadelphia because there are a lot of people who know about my case,” Hernandez said. “Some people don’t know but they start to know little by little and they are always willing to help in any way they can.”

“…What I wish for the most is for my order of deportation to be stopped, but with the support of the community that is what I’ve been fighting for me and my family,” she added.

Carmela Hernandez and her four children have been living in sanctuary at the Church of the Advocate for 10 months.

After coming to Temple, some students may question their faith. Others find it near campus.

Services for accessing food and toiletries in Philadelphia amid Temple’s winter break closure.