The defense, offense and special teams all contributed touchdowns in the Owls’ 37-13 win over the Buffalo Bulls Saturday.

Revenge was on the minds of the football team’s members Saturday.

And the Owls got it in a big way.

After a shocking last-second loss to Buffalo last season, the Owls came out and dominated the Bulls in a 37-13 victory at Lincoln Financial Field. 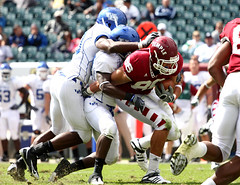 Temple entered the matchup with Buffalo looking for its first win of the 2009 season, while also trying to exact revenge from last season’s last-second Hail Mary touchdown pass that gave the Bulls a 30-28 win.

“Let me just say this about our organization and our kids,” Golden said. “People talk about the Hail Mary, but they forget the second part of that is ‘full of grace.’ Our kids handled it with grace for a year. It was in our grill every day for a year.”

It was the defense that came into the rematch with a chip on its shoulders, and the unit did not disappoint, as it bothered sophomore quarterback Zach Maynard and the Bulls offense all afternoon.

After allowing 27 points and 31 points to Villanova and Penn State, respectively, the defense held Buffalo to only 13 points and forced five turnovers.

The interceptions by Liverpool and Neblett were the first of their careers. Joseph returned his interception 95 yards and put the Owls ahead for good, 20-6. His interception run broke the school record of 92 yards that was set by Rich Lee in 1971 against Delaware.

“The kid made a good play. So much for coaching,” Golden said. “Most coaches would say to go down once you get that ball because nothing good can happen. You can fumble, but he found a lane, and he ran with it. So there was a lot of great effort on that play to make that happen, and I just think that Peanut [Joseph], that is kind of who he is now. I don’t think he gets enough credit. I think he is a heck of a football player.”

“You have to make plays when it counts,” Joseph added. “I just did my assignment. We needed a big play, so that’s what we did. We wanted to score on defense if we got a turnover, so that’s what went through my mind.”

While the defense harassed the Bulls’ offense, the Temple running game wreaked havoc on the Bulls’ defense. The three-headed monster of freshman Bernard Pierce, senior Lamar McPherson and sophomore Kee-ayre Griffin torched the Bulls for 198 yards rushing on 40 carries.

Pierce led the way with 20 carries for 116 yards and scored his first career touchdown on an 18-yard scamper that accounted for the Owls’ final points of the afternoon.

“He’s a big back,” Golden said. “I’ve been anxious to get a big back and get someone to do the things he can do. He uses his stiff arm well, and he’s always moving forward. All three of them really complement each other.”

Pierce said that using three backs allows him to be at his best at the end of games.

“The fourth quarter I actually felt really fresh,” he said. “It felt like it was the first quarter. [They] do a great job distributing the backs and making sure we’re fresh to run.”

McPherson and Griffin combined for 77 yards on 17 carries.

“I don’t think Bernard gets the runs he gets if Lamar doesn’t absolutely bring it downhill early. He went after those safeties early,” Golden said. “We had never been able to pound somebody to the point where we knew a long run would come, but Bernard gives us that, and mixing Kee-ayre in there helps as well.”

Golden also got help from his most dangerous weapon – sophomore wide receiver James Nixon. After Buffalo jumped out to a 6-3 lead, Nixon answered right back with a 92-yard kickoff return down the sideline that put the Owls back on top and ahead for good.

“That was the game plan. That’s what we’ve been practicing all week,” Nixon said. “We wanted to bring energy throughout the game, and after the kickoff return, it brought a lot of energy.”

“It’s great to have someone like that because it’s hard to replicate his speed,” Golden added. “He’s fast. That’s all I can tell you. I’ve been doing this as a player and coach for 21 years. He’s the fastest kid I’ve seen.”

Freshman kicker Brandon McManus, who took over the job during the game against Villanova, made field goals from 35 yards and 22 yards apiece.

And despite only completing six passes, redshirt junior quarterback Vaughn Charlton opened the second half with a 71-yard drive that ended with a 5-yard touchdown pass to sophomore tight end Evan Rodriguez for his first career score.

“It’s obviously a good win for us going into the MAC,” Joseph said. “We just want to take it one game at a time, and we want to reach our goals. They’re the MAC Champs, and they have what we want.”

What Golden wants right now is a turnover-free football team. After turning the ball over five times in the opener, the Owls have only turned the ball over twice in their past two contests.

“If you don’t turn the ball over and eliminate penalties, you’ve got a chance,” Golden said. “It’s part of being smart and more disciplined. Hopefully, we’ll continue down that path. We’ve got to get ready for Detroit and Game Two in the MAC.”

The Owls will play in their third straight bowl game against Florida International University in the Bad Boy Mowers Gasparilla Bowl in St. Petersburg, Florida, on Dec. 21.

More of the same