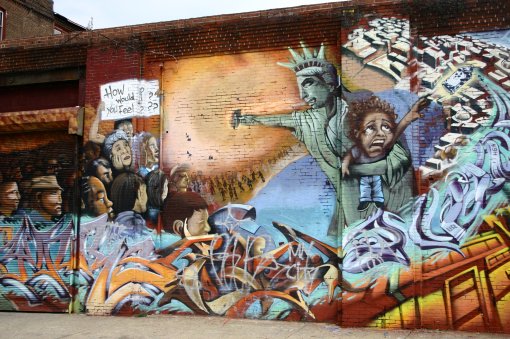 A vivid mural stares across a littered street at a dirt lot just one block from the Erie Avenue station on the Broad Street Line. The building that was once there fell years ago, but sections of thin plaster walls still cling to the adjacent brick house. Diagonally across West Erie Avenue, another dusty lot provides the neighborhood with a more recent reminder that it has been left to deteriorate.

The latter building fell just a few weeks ago, on March 6. The contractors have cleaned up the debris, but the chain-link fencing is still there. I talked to two elderly men standing at a side entrance of the East Bethel Baptist Church, which sits across the street. They said the house had been vacant for years, but had been used by drug dealers and users.

The mural across the street is titled “Forgiveness,” and was dedicated in October, 2007. It portrays Kevin Johnson, a North Philadelphia resident who became a quadriplegic after being shot at a party in Southwest Philadelphia in 2003. The title is inspired by his personal and public forgiveness of his attackers. Johnson died in 2006 from complications of his injuries.

“Put down the weight of hate and envy and blame and solitude and wishing that my circumstances could be different,” the mural reads.

The words seem like a quiet challenge to a neighborhood that needs its circumstances to be different.

Further south, another neighborhood with its own mural sees both the success and the failure of efforts to create neighborhoods worthy of pride: a building at North Sixth Street and Cecil B. Moore Avenue now lies in a heap of rubble, after its roof partially collapsed.
A 74-year-old woman had been living in another home connected to the building, though she was not hurt. The Philadelphia Housing Authority had placed the woman, whose name was not released, in the house a year ago. 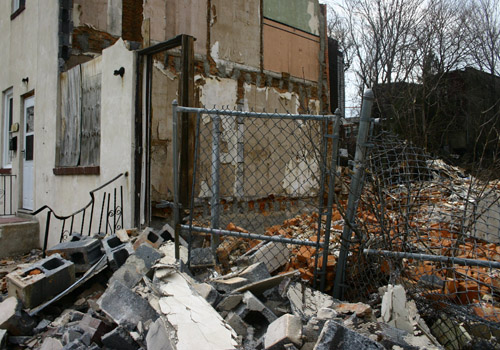 The city’s Licenses and Inspections department did an investigation, although they did not respond to my inquiries as to the conclusion of the investigation. PHA spokesman Kirk Dorn said they had inspected the building the woman was living in. While there may have been no danger to the woman, it is hard to believe that any part of a building might be safe to live in if another is in imminent danger of collapse.

A mural half a block from the collapsed building stretches along an old brick building. It features tidal waves, anime figures, crowds of people holding a rally, and an angry Statue of Liberty carrying away a young black boy. One of the signs in the rally reads “How would you feel?”

The mural seems to have anticipated the collapse of the building at Sixth Street and Cecil B. Moore: while it is not a disaster, it does not instill much faith in the city, and poses the same question of those who do not have to depend on public housing.

However, it would be a mistake to criticize PHA wholesale. Just one block to the west sit the Ludlow Homes, one of PHA’s newest housing projects. Ludlow Homes are a move away from public housing a la giant concrete boxes, and towards single-story one-unit homes, with the intent of creating a better community atmosphere. PHA thinks a lot about community, considering it houses 84,000 Philadelphians in 13,400 homes and apartment complexes.

If blame can be placed anywhere for crumbling houses that are not torn down or salvaged, and neighborhoods that are left, quite literally, to the elements, it is at the feet of the federal government, who, along with taxpayers, finance the PHA. Taxpayers cannot bear the burden, especially when the U.S. Department of Housing and Urban Development threatens to remove $50 million from PHA’s budget, which it has.

While politicians play their games, Philadelphians try to forgive, and to put down the weight of hate and envy.

Students from Paul L. Dunbar School were elected to its new student government.

Locals in arms over hospital buildings

The newly constructed medical school high-rise building, built alongside two- and three-story rowhouses, is negatively received by longtime residents who reside near the structure.