The Owls have started 3-0 in the Atlantic Ten.

While most of Temple’s student body was enjoying winter break with family and friends, the women’s basketball team was hard at work taking care of business.

It may have taken a while, but the Owls have finally found a groove after winning their last four games before the spring semester. Led by coach Tonya Cardoza, the team went 5-2 over break and started off its Atlantic Ten Conference schedule with three impressive victories. 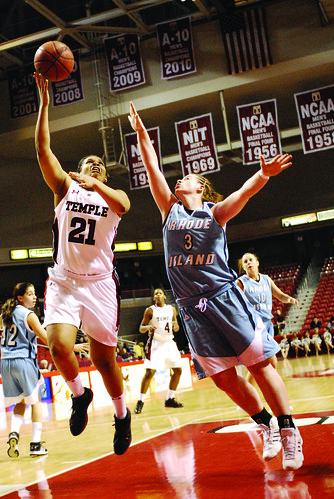 ANNA ZHILKOVA TTN Freshman forward Nikki Works goes for a layup against Rhode Island on Jan. 12. The Owls ransacked the Rams, 81-34. The team shot 47.8 percent from the field in the win.

The recent surge came at the perfect time, as the Owls find themselves on top of the A-10 with a 3-0 record (11-6 overall). A thrilling win over Charlotte to kick off the A-10 season led to dominating performances against Rhode Island and Fordham, at which the Owls combined to outscore them, 152-62.

The trio of junior guard Shey Peddy, junior forward Kristen McCarthy and senior guard Qwedia Wallace has combined to score 35.3 points per game over their past seven games, including a close loss against No. 3 Duke which saw Wallace, who grew up in Wilmington, N.C., tear apart the Blue Devils for 21 points.

Her performance opened some eyes, including Duke coach Joanne McCallie’s.

“We didn’t do anything to stop [Wallace] in her homecoming,” McCallie said after the game. “She pretty much had her way with us, which is pretty disappointing.”

Temple opened break with a 55-43 win against rival Villanova before dropping games to Eastern Michigan and Duke. Peddy and Wallace led the team with 19 and 17 points, respectively, against Nova, and Peddy added six rebounds and five assists for good measure. Peddy also reached 1,000 points in her career during the loss to Eastern Michigan.

The Owls then took down Akron, where junior guard Satoria Bell, McCarthy and Wallace combined for 52 points. Wallace followed up at Charlotte with four points in the final five seconds of regulation play as Temple came from behind to win, 60-57.

“Going down to Charlotte, that was a big win for us,” McCarthy said. “To open up down there, and the atmosphere that they had, I thought that was a really good win for us.”

McCarthy, Bell and Peddy then combined for 47 points in a rout over conference-rival Rhode Island at the

Liacouras Center in their first home game of  2011 before dismantling Fordham on Saturday, 71-28.

While the 3-0 record in the A-10 is a good start, it is too early to tell how the team will fare. Cardoza has expressed concern with the team’s performance in the non-conference portion of the schedule, where the

Owls closed out 2-2 in their final four games, including a tough loss to Eastern Michigan.

“Hopefully we learn from our non-conference season,” Cardoza said after the Rhode Island game.

The close loss to a nationally-ranked opponent like Duke is a moral victory and can show what the team is capable of when they bring their best performance, but the Owls can’t afford to lose easy games at this point in the season.

Temple has tough sledding ahead against the top teams in the A-10, where Duquesne, Xavier and Richmond round out the undefeated teams at 2-0 each. Duquesne is 15-2 on the season, and if early indications hold true, the Owls will rise to the occasion. If McCarthy and company can bring their A-games against the top teams and steal some wins, they could put themselves in good position to win the A-10.

But it’s the so-called easy games that could trip up the Owls. The team can’t let teams like Saint Louis, George Washington, Massachusetts or La Salle, all of which have sub .400 winning percentages, get the best of them.

After the big win against Rhode Island (6-10, 0-2 A-10), McCarthy and Cardoza were visibly pleased with their performance, which finally showed what the team is capable of doing when they approach each game with the same intensity.

“You’ve got to get up every single day,” Cardoza said.

“A lot of times when we play teams that aren’t as talented as us we tend to play down to their level, but we played hard and aggressive the entire game and that was the result,” McCarthy said.

The Owls are going to need performances like this to win the A-10 and need to keep this momentum for the rest of the season.

“If those first [three] games are any indication, then yes, we’re on the right track,” Cardoza said.

The Owls’ first game of the spring semester is at home, where they will host rival St. Joseph’s on Wednesday in another critical A-10 match.

Jake Adams can be reached at jake.adams@temple.edu.

Six up, six down

The Owls’ seniors hope to capture the A-10 title. Temple’s 71-44 win against La Salle on Saturday was just a formality as the women’s basketball team (20-8, 13-1 Atlantic Ten Conference) already clinched the second